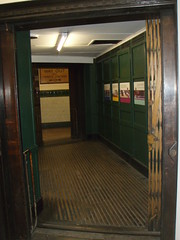 Myths are extremely powerful. They have given rise to most of the world’s religions and have thus played a massive role in the history of every country on the planet. But when it comes to determining how close the myth is to truth, huge difficulties arise. In one sense, this does not matter – what is important is how many people believe the myth to be true or are unwilling to dig too deeply in case their prejudices prove to be ill-founded.

An example of how a myth can arise and be widely accepted, but can also be seen to be based largely on fantasy, is the story of Lord Dufferin and his apparent saving from a terrible death.

Lord Dufferin was a British diplomat who – so the story goes – was having a break in 1883 at a country house in Ireland. One night he heard a noise outside and went to investigate. He saw a man staggering across the lawn as he carried what turned out to be a coffin. The man’s face was contorted with hate and utterly loathsome. Lord Dufferin stepped forward to confront the man and walked right through him, after which the man and the coffin disappeared.

When Lord Dufferin told the people who lived at the house what had happened, none of them could give him a clue as to what he might have seen. There were no local ghosts who fitted the bill, and the man’s description meant nothing to anyone.

The story now moved on ten years, to when Lord Dufferin was British Ambassador to France. He attended a reception at a hotel in Paris, where the main event took place on the top floor and nearly everyone used a lift to get there from the entrance hall.

Lord Dufferin and his secretary joined the queue for the lift and eventually reached the head of it. However, when the lift doors opened, Lord Dufferin was horrified to see that the lift operator was the same man that he had seen carrying a coffin across an Irish lawn, ten years before. He refused to get into the lift and pulled his secretary back as well. The crowded lift ascended but, when nearly at the top, the cables broke and the lift plunged all the down, killing everyone on board, including the lift attendant.

Lord Dufferin tried to find out who the lift attendant was, but nobody knew. The hotel had only employed him as a casual worker, and nobody ever came forward to claim the body.

And so the tale stood, as a classic ghost story involving a ghastly apparition that saved a man’s life. Although the lift accident was in 1893, it was not until 1920 that an account appeared in print. It was included in a paper written a French psychologist named De Maratray and then in a book entitled “Death and its Mystery” by a French astronomer named Flammarion.

So it must have been a true story, then?

Neither De Maratray nor Flammarion had checked their facts. Had they done so, they would have discovered that the lift accident had actually occurred in 1878, which was five years before Lord Dufferin’s supposed Irish vision. The accident had nothing to do with a diplomatic reception, and Lord Dufferin was in Canada at the time!

It appears that a similar story was first told in 1892, involving a woman who had a dream in which a hearse stopped outside her house and she was asked by its driver “Are you not ready yet?”. This question was asked by a lift attendant when she paused as she was about to enter, which she then refused to do. As you might expect, the lift crashed and the man was killed.

This story was told by another unreliable raconteur but that did not stop it doing the rounds and growing in the telling.

One variation was regularly told by a certain Lord Dufferin, who knew full well that he had nothing to do with it. He told it to an impressionable young nephew, but put himself into the story. The nephew believed everything he heard, having no reason to doubt his uncle’s story. He grew up to be a well-known writer, his name being Harold Nicholson.

Nicholson also passed the story on, with Lord Dufferin as the main character, and one of the people who heard Nicholson’s version was De Maratray, the French psychologist.

And so the myth was born. So many myths start in very similar fashion!