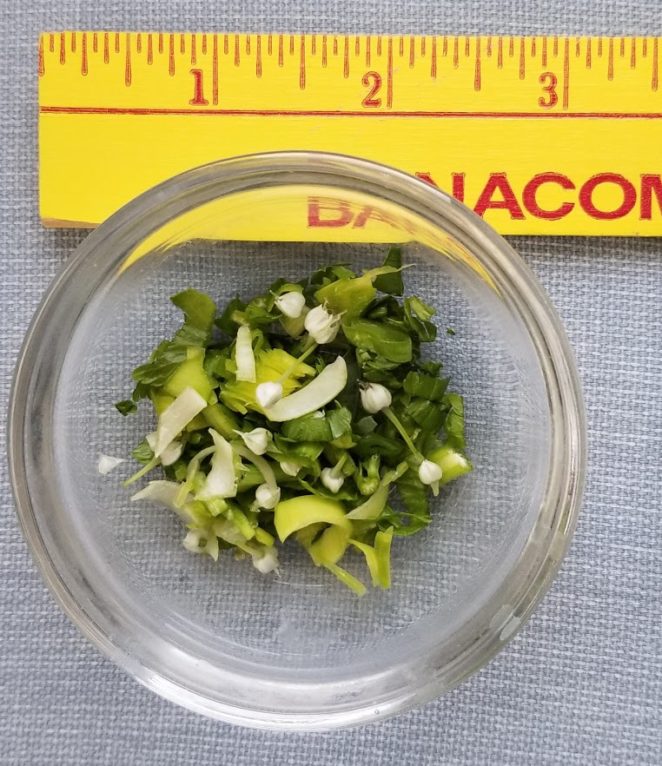 The classic fines herbes recipe calls for chervil, chives, parsley, and tarragon, and one of the usual drills is to sprinkle it over the top of an omelette. I like the concept very much, but use whatever mixture of fresh herbs and greens is on hand. Today it was leek florets, turnip greens, and celery leaves. I warmed a tortilla in butter, melted pepperjack cheese on top of it, topped that with a couple of easy-over eggs, then added black pepper and the contents of the mini-prep bowl shown above. That is my usual signal for the phone to ring and today was no exception. Naturally I ignored the phone, as this wanted to be eaten before it got cold.

The bowl is French Duralex from Williams Sonoma. It is a part of their 10-bowl nesting set. The smallest bowl is 1 1/2 ounce and they go up to 4 1/2 quarts.

The company that came up with Duralex in the 1930’s has been in business since 1665. Duralex is tempered glass whereas Pyrex is borosilicate. Both are stronger than ordinary glass, but while Duralex can break if subjected to abrupt temperature changes, it is less likely to break during normal usage. Pyrex is good for ovenware because although it is a bit weaker than tempered glass it has less surface tension. That means if it does break it falls apart into large pieces instead  of exploding like shrapnel.

Have you ever broken a Pyrex or Duralex dish?