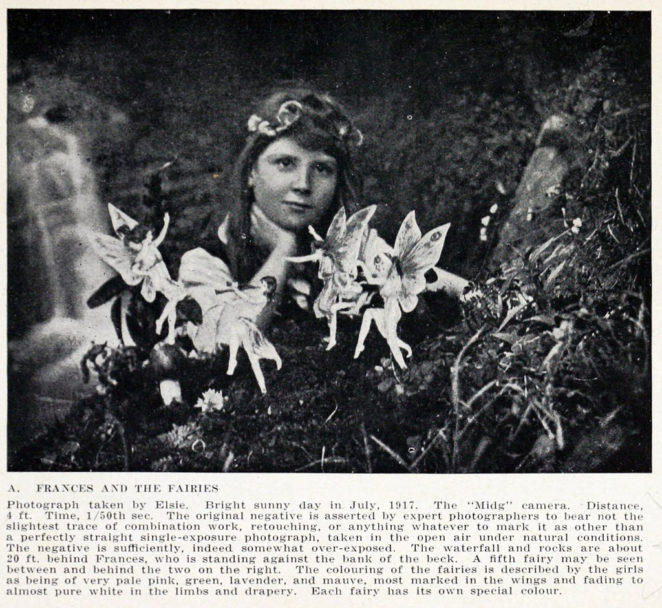 Looking back, I wish I had told the truth all those years ago. It would have saved so much trouble later on. The problem was that our little game got completely out of hand, and then there was the money to think about – but perhaps I’d better tell the whole story from the beginning.

My name is Frances. I was Frances Griffiths when it all happened. I was only ten years old at the time and everyone called me Fanny.

I grew up in South Africa but was sent to live in England when my Papa went to fight in the Great War, as we called it then. I stayed with my uncle and aunt, the Wrights, at their house in Cottingley, which is a village in Yorkshire. They had a daughter named Elsie who at 16 was quite a bit older than me, but that didn’t seem to matter and we became very close friends as well as being cousins.

When we weren’t at lessons we used to wander all over the place and had great adventures in the fields and woods near the house. A favourite place was the Dell, which was a shaded spot down by the beck. There was a little waterfall there and we used to paddle in the stream and see if we could catch the little fishes in our hands. Elsie used to make up stories about the fairies who lived in holes in the banks and granted you wishes if you solved their riddles.

One day we were so busy enjoying ourselves at the Dell that we forgot all about the time and suddenly realized that we would be late for dinner. In our haste to sort ourselves out I slipped and half fell into the beck. My pinafore was badly soaked and I had no choice but to go back home and hope that we could slip upstairs and change our clothes before anyone noticed.

However, we were out of luck because my aunt was waiting for us at the door. “Where have you been all this time?” she asked. “And why is your pinafore soaked, Fanny?”

I then said the first thing that came into my young head. “We’ve been playing with the fairies in the Dell, Aunt. They were such good fun that we forgot the time, and they kept splashing my dress.”

I should have known that this story would get me nowhere, and the look on my aunt’s face told me that I was about to get a really serious telling off. Elsie must have realized this too, because she then said something that I really didn’t expect, but it was said purely with the intention of helping me out of a hole.

Of course I had no idea how Elsie could possibly do that, but simply saying what she did seemed to solve the immediate problem, because my aunt’s expression suddenly changed from a frown to a smile. I thought at the time that she must be laughing at the preposterous thing that her daughter had just said, but later on I began to wonder if there wasn’t another reason. As it happened, we were simply ushered upstairs to change and nothing more was said about our being late.

The next morning, before lessons, I found Elsie hard at work with a sketchpad, scissors, pens and glue. Elsie was a good artist, and she had made some excellent copies of pictures that she had found in a book. They were pictures of fairies in various poses – some of them dancing and others playing musical instruments. She cut her pictures out of the paper and glued them onto pieces of card. When I asked her what she was doing she simply told me not to say a word to anyone else, and especially not my uncle and aunt.

That evening Elsie finished making her fairy pictures and she told me that the following day, which was a Saturday, would be a great day for putting her plan into action and I would need to get up early and be very quiet so as not to disturb anyone.

When I saw Elsie in the morning I was astonished to see that not only did she have a stiff folder under her arm but was carrying her father’s camera, which was a box about six inches deep with a leather handle on top. I helped her by carrying what I could and opened the doors quietly so that we could escape from the house without detection.

We made our way down to the Dell, just as the sun was sending beams across the water and illuminating the waterfall under the trees. Elsie got to work arranging her four fairy pictures, on their stiff cards, so that they stood up on the edge of the bank. She had to use her hairpins to make this happen, but the end effect was excellent.

Elsie then asked me to go round behind them and look back at her and the camera. Elsie had used it many times before, having been taught how to do so by her father, although she usually asked his permission before borrowing it. She told me to stay perfectly still while she exposed the photographic plate in the camera by clicking the shutter.

Back home, Elsie asked her father if he would develop and print the plate that she had used, without telling him what it was. He was intrigued and happy to let us into his darkroom so that we would be the first to see the result. When the image came into view, there were the fairies dancing in the foreground, with me behind and the waterfall to one side.

When the photograph was ready my uncle rushed out of the darkroom to show my aunt. “Look at this”, he called out, “there really are fairies in the Dell!”

I knew straight away that Mr Wright could tell that his daughter had done something very clever with the camera and taken a trick photograph that he would have been proud to produce, but my aunt gasped when she saw the picture. We both noticed this and thought that we could play a really good prank on her if we took even more fairy pictures, because she seemed to think that they were real.

So we took four more pictures over the next few days and Mr Wright joined in the joke and developed everything that we produced.

However, things took a completely different turn when Mrs Wright showed the pictures to some friends of hers who were interested in folklore. They then told some other people and the thing just snowballed.

One day there was a knock on the door and a very distinguished-looking man, with a huge moustache, introduced himself and asked to meet Elsie and me. He said that his name was Arthur Conan Doyle and that he had written lots of books including all the stories about Sherlock Holmes. He really believed that fairies existed and that he had been looking for proof like this for years. Elsie was about to tell him the truth when he reached into his wallet and pulled out a whole lot of five pound notes. He gave four of them to Elsie and another four to me.

Twenty pounds! I had never seen so much money, and it was mine! Well, we could hardly tell him that it was all a trick, could we?

And that was how the legend of the Cottingley Fairies came about. I know that it was wrong of us not to own up, but we were so young and simply didn’t know how we could back down. We would have had to give the money back for one thing!

Well, what would you have done?