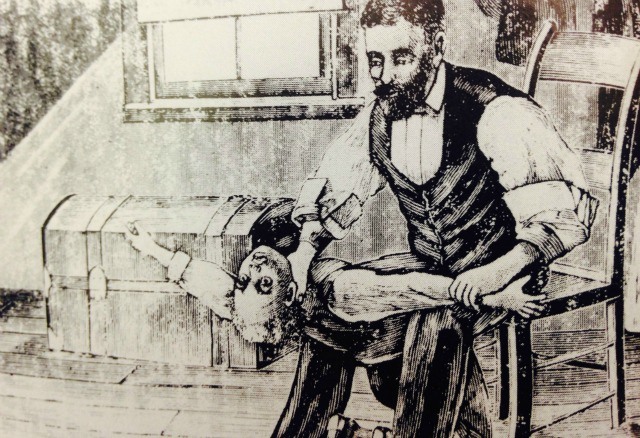 One of America’s first notorious serial killers Dr. H. H. Holmes could have very well been the Devil himself. After his reign of terror, he was convicted and hanged on May 7, 1896, in Moyamensing Prison in Philadelphia, Pennsylvania. While Holmes was terrorizing innocent people in the U.S. London, England was dealing with the horror of Jack the Ripper. It was Ripper that gained the most popularity.

This horrible and frightening man came into the world as Herman Mudgett in New Hampshire. As a small child, he tortured animals. However, he was not deranged he was very intelligent and graduated from the University of Michigan with a medical degree. Holmes was clever enough to finance his education through insurance scams. In a most horrible way, he requested coverage for people who were non-existent and then presented corpses as the insured. Holmes moved to Chicago, Illinois in 1886 and began work as a pharmacist. When the owner died he bought the pharmacy from the owner’s widow who mysteriously disappeared afterward. He then managed to raise enough money to build a monstrously large house right across from the store. He called his home “The Castle” and it had lots of secret passageways, fake walls, and trapdoors, There were rooms which had been soundproofed and then connected by pipes to a gas tank located in the basement. In his bedroom, Holmes has controls to be able to fill up these rooms with gas. There was also a laboratory in the basement which he used for dissections.

When the World’s Fair came to Chicago in 1893 young women who lived in the area and visiting tourists rented rooms in Holmes’s castle. These people started disappearing and medical schools bought lots of human skeletons from Dr. Holmes never thinking to ask where he obtained these anatomy specimens from. This horrible man was caught at the moment that he was trying to use another corpse in an insurance scam. When all was said and done authorities found the remains of more than 200 victims on his property. In 2003 a book was published about Holmes and his murderous spree during this time written by Erik Larson, “Devil in the White City”. Whether such a thing could be possible or not a descendant of Holmes Jeff Mudgett wrote a biography in which he speculated that H.H. Holmes was actually Jack the Ripper. In this regard, he submitted handwriting samples to be matched against those of Ripper and they were found to be a 97.95% handwriting analysis match yet, the conclusion still remains an open question. How’s that for a hair-raising thought? The Castle was torn down in 1939 and a post office was built on the site.

I leave you with a confession from Dr. H.H. Holmes, “I was born with the devil in me. I could not help the fact that I was a murderer, no more than a poet can help the inspiration to sing.”

Reference: A serial killer is hanged