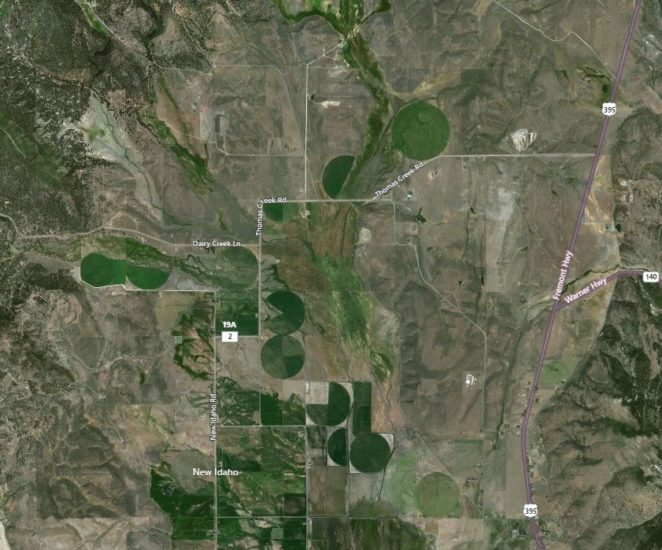 If you look at the pictures, you’ll notice circular or semi-circular areas of green, surrounded by gray. These are real pictures, actually satellite images of Eastern Oregon. They are literally ‘crop circles’, but not of the sort you might read about in the National Enquirer. These crop circles weren’t made by mysterious spacecraft or people from another world.

You see, these were purposely made by man. They aren’t part of some elaborate hoax, either. They are there in part because very little grows in the Oregon High Desert except for sparse grass, sagebrush, rabbitbrush, an occasional scrub tree, such as juniper, and in some places, prickly pear cactus.

From orbit, the sparse vegetation and the sun-baked and very dry soil looks varying shades of gray. In places, it can look almost white. If you were to add water to the soil, though, it turns dark in color.

You might wonder why the crop circles are mostly varying shades of green. This is because these are agricultural fields. In the center of each of the circles, there is a pump and a well. You can't actually see them because of the altitude of the picture.

To each well-head, farmers attach a nine-inch wheel line. This is aluminum irrigation pipes in segments about 20 or 30 feet long, with each of the segments going through the hub of an aluminum wheel that is usually about 6 feet in diameter. On the top of the irrigation pipe segments, there are one or two sprinkler heads. The segments pop together and are clamped, so they form a line directly away from the well-head.

Each of the wheel lines is equipped with a motor that is attached to one of the wheels. The line is moved by using the motor, otherwise, it would be too heavy to move, even though it is made of aluminum.

Since a wheel line is attached to a stationary but flexible well-head, the wheel line moves in a circle. The farmer moves the wheel line a given distance, then he shuts off the motor and goes to the pump and well-head. He starts the pump and opens the valve at the well-head, allowing the sprinklers to deliver water to that section of the field, which has already been planted at that point.

The wheel line is moved a little every day, like the spokes of a wheel, and gradually the crop grows. The result is green circles. The green is of different shades because of different crops and the age of the crops.

If you look carefully, you'll see that one of the circles has a gray wedge, making it look rather like a leftward facing Pacman. This is because for one reason or another, the farmer that owns that field isn't growing any crops in that wedge. This is likely due to soil that is rocky or otherwise too difficult to farm.

It sounds like a lot of trouble, but this is one of the only ways that crops can be grown in the desert of southeast Oregon. 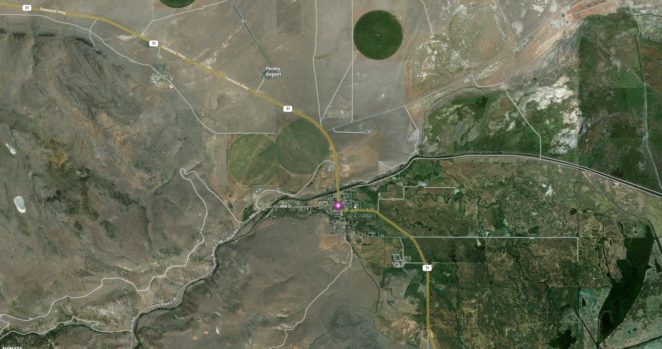 This image isn't too far away from the last picture, but this is of the town of Paisley. Paisley is a town that is about the size of the one I currently live in. It began as a lumber town since there are heavily forested mountains just out of the picture to the bottom left. The mill no longer functions, but agriculture still brings in enough money for families to survive.

One of the crop circles can be seen north of town. Judging from the shade of green, my guess would be that it is an alfalfa field. The area around town and stretching to the west and south appears a little greener because this is lowland that is fed by the Chewaucan River. That is pronounced "she-waa-CAN" and it is the snake-like line that stretches from the lower left through town.

If I complained about our ~90-degree weather, people in Paisley would laugh. Each summer, temperatures top 110 F and they feel fortunate if the nighttime temperatures drop as low as 90. They are good, friendly, hard-working people, though, and this place has the definite feeling of a small country town.

My mother and father both went to high school in Paisley and I've spent countless hours flyfishing the Chewaucan.