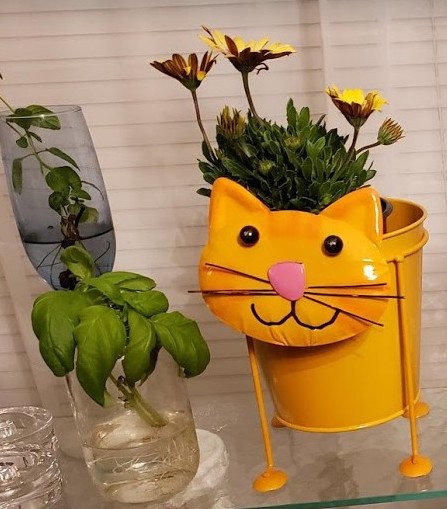 This is the first time I have tried to participate in a challenge here on Virily, and it is happening solely  thanks to Kim’s tenacity.  Besides my orange tree which is full of colorful fruit, I have three orange planters in the shape of minimalist cats.

They were an impulse item at the dollar store, as if I needed more STUFF.

I intended to put them outside but it has been raining so here they are indoors brightening up my plant “hospital” –that is where I root cuttings and that sort of thing by my brightest window.   They may get to stay inside, though, because I am becoming quite attached to them.

Did you know that the population of orange cats is predominantly male?  In fact about 80% of ginger tabbies are Toms, unlike calico cats which are more likely to be female.  Although orange cats tend to be less active than cats of other colors, the female gingers are less active than the males.

I have had a lot of cats of many different colors, but I have never had an orange cat, at least not until now.

Hopefully, the timing on this is right.  It is technically still Sunday, but by the time Virily editors approve my post it will probably be Monday.