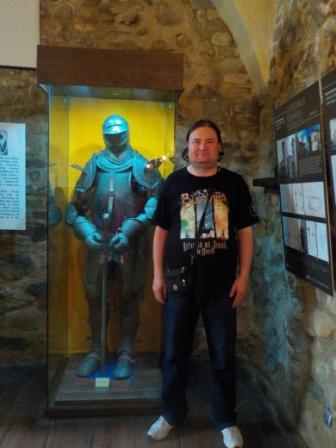 Staying at home almost all day long during these troubled days is not that pleasant, especially when you live in a block of flats and not in a house with a large yard. After a while boredom settles in and the desire to get out, forget about the TV and laptop for a while and go for a long walk in town is quite strong, but I know that isn’t the wisest thing to do now, therefore I prefer to travel în time and space only with my mind since fortunately imagination cannot be placed in lockdown yet!

Today, after looking back at some pictures from a journey I made to Romanian citadel, I have decided to let my mind wander to the middle ages simply because of a photo in which I was standing next to the armor of a medieval knight. Suppose the time machine had just been invented and I would be offered, for a reasonable price the chance to escape from the reality of the coronavirus pandemic by living for a few months in another period, would I take advantage of such an offer? Well, even if my relatively low budget could only allow me to travel to the Middle Ages, which is undoubtedly not the most enlightening period in the history of mankind, I would certainly buy my ticket for a chance to live in those times!

The ideal scenario would be to live like a king or a nobleman, but since such rare and precious slots were occupied by people with financial power, I would have to settle for a knight. I think it would be quite a bewildering experience to wear armor similar to the one from the photo and try to get used to it, but apart from this I think it would be exciting to live like a knight, which in my imagination means to ride horses, train for battles, become an expert at handling the sword and other available weapons, take parts in tournaments in front of the king and his court and have some great parties with plenty of wine, meat, singing and dancing in medieval style. From these points of view, it would be quite an adventurous lifestyle and probably it would almost never become boring!

However, for all these exciting parts of living as a knight that come to my mind, there are also plenty of drawbacks, as that period is also known as the Dark Ages. I would definitely not be able to satisfy my thirst for knowledge and culture and I would probably feel sorry for not having raised more money to allow me to travel to the renaissance, and I would probably witness a lot of death and indescribable atrocities around as wars and crusades were so frequent in those times. Furthermore, the lack of hygiene and the scarce medical knowledge of the time would also make me witness horrible diseases, such as the Black Death, one of the worst pandemics in human history, which would make me abandon my journey sooner than I had anticipated and go back to the 21st century. It would surely be a memorable experience, but for all the wrong reasons!

My imaginary journey for today is now over; my mind is back to the harsh reality we all have to deal with, but after thinking about what it was like to live as a knight in the Middle Ages I realize that there were periods in which people were confronted with much worse issues and had far less knowledge than we have, and yet they survived and moved on. This thought gives me more confidence that once again mankind will defeat this terrible enemy and we’ll be able to live again the way we used to. Until then there are still many days ahead of staying at home and social distancing, but nothing can stop our minds from wandering once in a while!