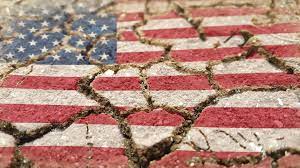 The United States has always had the best propaganda.

It could announce; “All Men are Created Equal,”  despite how many millions were slaves.

This is because America has always been the most racist nation on Earth, although on occasion challenged by other countries; Germany or South Africa, for the title, it has maintained its position.

That every so often to ‘prove’ it’s ‘freedom’ and ‘liberty’ it lets a law or practice prevail, but it is only temporary.  For America is made up of racists.  Some admit it, some proudly admit it, others say nothing keeping their sentiments to themselves.

America has always been an aggressor, focusing on weaker nations, paying off a portion of a nation’s own citizens to topple a government, then stepping in, and taking charge.

America only walks away when the expense of control is more than the gains.

What the world is seeing today is an unmasked America.  An America in which racism and wealth rules and its citizens are used as puppets.

That the Civil War was never concluded is obvious.  That there was never  reconciliation nor attempt to solve the issues, now blossoms due to the effect of Donald Trump.

One can expect more mass shootings, more racist based murders, more stripping of rights, until the implosion takes place.

China need merely continue its trade and involvement in other nations, so that when the United States crumples, they will only step up production and widen already existing markets.

Russia and China are going to support Trump’s attempt to return to the Oval Office.  Never before has any America president been so useful to their aims;  Trump worships Putin, and ignorantly tried to take on China; and failing.

As soon as he returns to Office, Russia will move to regain the territory it lost with the break up of the Soviet Union. China will continue its trade, capturing the few remaining markets for American goods.

That Americans are unaware of what is happening, that they don’t appreciate their actions are destroying their own nation is not unexpected, considering the plummeting intellects of Americans.   This decline has been obvious for decades.  So many non-Americans have been recruited for skilled tasks, be they doctors, nurses, computer technicians, etc. because there are not enough Americans with the required intelligence to perform.

The world can sit back, eat the pop corn, and watch America swirl down the drain.