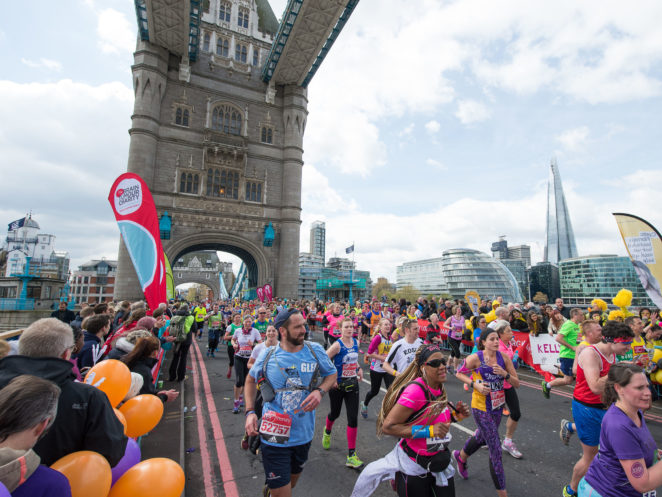 This is my contribution for this week’s meeting of the “Hinckley Scribblers” – the writers’ group to which I belong. The theme was: “He awoke with a start”.

To say that he woke with a start would not be strictly accurate, mainly because he was quite certain that he was not awake at all. There was, however, a start involved – in particular a starting pistol that went off with a loud bang and started the runners in a huge race.

The race in question was the 2019 London Marathon, and Joe appeared to be one of the competitors.

But how was that possible? As far as Joe was concerned, he was asleep in bed a long way from London. Also, he had no memory of ever having entered the London Marathon, let alone bought a pair of running shoes or a singlet and pair of shorts.

Come to that, he did not have the slightest interest in running. He had never been any sort of athlete – always last in running races at school and in later life he could rarely be bothered even to run for a bus. There could only be one explanation. He was having a dream.

As dreams go, this was a pretty realistic one. He was surrounded by hundreds of other runners and he seemed to be keeping up with them quite well. For somebody who had never done a day’s training for road running, this was not proving to be too difficult, although he could certainly feel every step as his feet hit the ground with a solid thump.

Ah, but this was a dream, wasn’t it? That meant he should be able to run really quickly, or maybe even fly. I’ll try flying, he thought, and waved his arms in the air. He failed to get airborne and prompted a cry from a close neighbour of “Mind what you’re doing, Mate, you nearly had my eye out there.”

This won’t really be London of course, he thought to himself. Round the next corner he was going to see the Pyramids, or the Statue of Liberty. But what he saw was another long street stretching into the distance, filled with thousands of runners just like himself.

But they won’t all be like me, will they? he pondered. Some of them will be dressed as camels or post boxes, and some of them will be joined together as Chinese dragons. But this is a dream, so if I see a unicorn it’ll be a real unicorn, not some pair of idiots wearing a unicorn costume.

But no, every fun runner in a costume was exactly that – an idiot making life extra difficult for him or herself by wearing some ridiculous outfit to get themselves seen on TV.

Relief at last. He had seen something that absolutely confirmed that he was in a dream. There, a few yards ahead, was the Pope at the side of the road being interviewed by Clare Balding. The real Pope would never take part in the London Marathon, and there could surely be no doubt that this was the real Pope. He was the right height and build, and he looked just like all the photos Joe had ever seen of Pope Francis. He would know for certain when he ran past.

But were the backs of Pope Francis’s hands really covered in tattoos? And would he really be carrying a banner that read “Epping Forest Hell’s Angels”? It seemed improbable, to say the least.

He could not remember having dreams that lasted quite so long, especially ones that did not go decidedly weird at some point or other. But this one refused to deviate from what looked decidedly like reality. All the landmarks were in exactly the right places – Cutty Sark, Tower Bridge, Canary Wharf, the Thames Embankment, Big Ben – and they all looked exactly as they should have done.

This dream was also exhausting. He felt as though he really had been running for more than 26 miles on a Sunday morning in London. Surely he should wake up soon?

And wake up he did. There he was, in his own bed, with everything exactly as it should be.

That was the most vivid dream he had ever had. It was so vivid that his feet felt sore and his leg muscles exhausted.

But what was this thing dangling round his neck that certainly had not been there last night? There was no doubt about it. It was a genuine 2019 London Marathon Finisher’s medal.