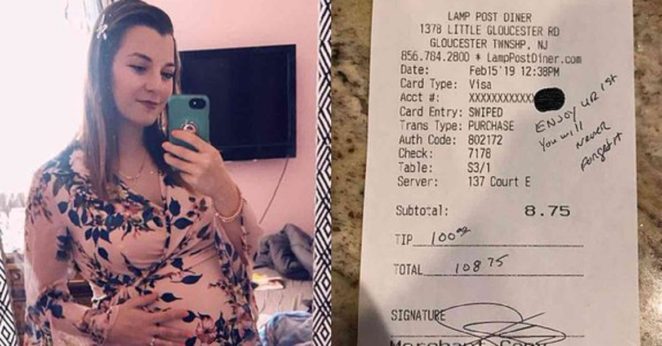 A police officer in Gloucester Township New Jersey was at his table getting a glass of water and salad when he decided to assist a server named Courtney English, 23, who is eight months pregnant working to save money when her first child will be coming into the world when he overheard Courtney talking to another customer about raising money for to pay the bills for the event of taking care of her first child after the birthdate.

What the police officer did to assist Courtney have some extra money to meet her financial obligations after the birth of her child was to leave a tip of $100 dollars and a note to congratulate her on having her first child.

Normally when a person such as a celebrity or sports stars makes a donation in public to a server or another person in the workforce earning a living, they usually have a selfie with the lucky person or record their act of being generous on the social media sites.

The name of the policeman was not revealed to Courtney since he did not want to be recognized for making a huge tip to his server since he does not want the publicity revealed in public.

Brian Cadagan who is the father of Courtney went on Facebook to report that he is very thankful that the police officer who gave his daughter a huge tip since the police officer admitted that he recently became a father for the first time in his lifetime.

It is nice to see a law enforcement officer assisting a server who is expecting a child for the first time getting a money boost via a huge tip that is very rare for any server inside a diner.