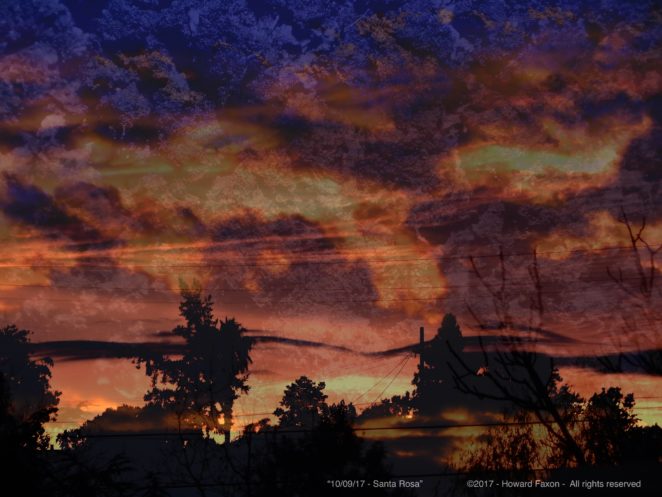 Santa Rosa, California is a city with a population of roughly 200,000 people. One night while most everyone was sleeping a wildfire blew into town and moved so fast that shopping centers, major hotels, and whole neighborhoods burned to the ground. For the first couple of hours most of the efforts by responders were dedicated to evacuating people. It was pretty much all they could do to get people out of the way. These poor people left their houses so fast they didn’t even have their cell phones, wallets, etc… It was a really bad week.  This image was made because of this event, named after the event, and I thought for the first time about why art might have a date for its name.

I made this image in response to an artist call for entries. The show that was to be titled ‘Sonoma Strong’ would feature art related to this catastrophe and the recovery from it. Sonoma is the county that Santa Rosa was the capitol of. I submitted this image as a large mural piece and was not selected. They never say rejected. Now I have it and it has only existed in digital form. Files need names and art needs titles ….

My titles always come later – well after the work is finished. And, I’m really not much good at titles. Images come from one place and titles come from a place completely different. It’s hard to adeptly smoosh them together. So, in a hurried moment, I titled this one “10/09/17 – Santa Rosa”. I had never named something after a day before …

Why do artists title a work after a particular date? I never really stopped to think about it. Now I realize what it does over time though. It’s a marker to history.  If you view the work, and want to understand it, you have  to know what happened on that day. There is that Goya painting and I realize now the painting was named for its future. An indelible stain demanding a historic explanation. … Oh, my guess is that “10/09/17 – Santa Rosa” will never exist in the actual world. I’ll bet you 10 bucks.