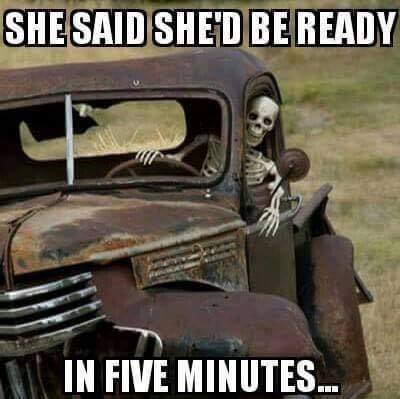 I found this meme funny. I don’t know how many times my wife or daughter have said something like, “I’ll be ready to go in two minutes.” Fifteen minutes later, I’ll still be waiting for them to finish doing what they assured me would take ‘just a second’. I know that I’ve been guilty of doing the same thing. I also remind myself that I often set unreasonable expectations. Correcting this is a work in progress for me.

I’ve come to realize that if my wife is doing her Bible study, “I’ll be done in five minutes” really means, “You might as well relax because it is going to take me at least a half hour to finish this part of my study.”

Words do mean things and nearly all of us are guilty of sometimes saying one thing and meaning another. That is definitely true in matters of time. I’m constantly waiting on my wife to do something that is taking far longer than she said it would. Of course, if she must wait for me, it is a different matter entirely and she can be quite impatient, to the point of being terse.

All of this could probably be corrected in one of two ways. If we said what we meant and what others could reasonably expect, the situation would be defused before it became an issue. Otherwise, if each of us set our own reasonable expectations, many difficulties could be avoided.

I used to be very impatient, particularly when someone gave me a set time-frame and I end up waiting for them. It honestly doesn’t bother me anymore. I just multiply their time estimate by pi, squared. By the time I can mentally figure out what that number is mentally, they are finally ready. Hey, it works.