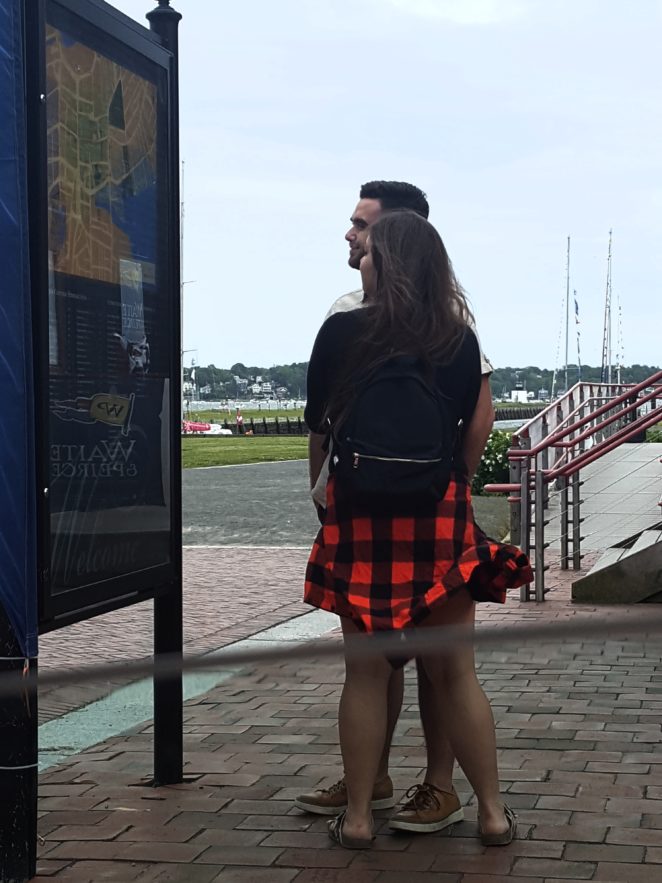 A few weeks before Phil Oulette & I had accompanied Donna Marie to some New Age event at Brandeis University – I can’t remember what because by this time I had lost patience with “new age” events that didn’t directly support an active environmental or peace agenda. Too much of the so called new age folks I had encountered on the North Shore were better at marketing than meditating.

We met this guy Erroll who Donna Marie was instantly smitten with. I was somewhat suspicious of him but couldn’t put a finger on why.  A few weeks passed & most of that time I was at my teacher’s aide job in Walpole or in Boston working on the South Africa Divestment campaign.

Early April I get an S.O.S. call from Donna Marie-her ex boyfriend Chip had another violent flip out, she was afraid & wanted me to come hang out with her at a guest house near the Lanesville/Rockport border.  I said okay & drove the 74 miles from Foxboro to Lanesville. I was getting sick & would soon be spiking a fever. As I arrived in Cape Ann NPR radio was announcing that Argentina had sent forces to reclaim the Malvinas Islands. The announcer said the Royal Air Force was prepared to respond. I had mixed feelings about the news. I despised the Argentine military dictatorship. I equally detested Margaret Thatcher & the arrogance of British imperialism. A little island full of sheep was about to become a war zone. Meanwhile I was sweating as my temperature shot up and glad I was almost at the end of the winding road to Lanesville.

I arrived that morning & listened to Donna Marie’s story. I was feeling  weak & feverish but was determined to be strong and supportive. I knew Chip and knew his temper tantrums were not a pretty sight. He had been violent with Donna Marie before and one weekend the previous summer I drove her and her little girl to a secluded cabin in New Hampshire after he had tried to beat her up. At some point I was hugging Donna Marie after hearing of all the stress she had been through, and she looked up at me & kissed me. It was the kind of kissing I had dreamed about when I first met her & had come close to on  a few nights over joints & beers. We started kissing & holding each other like we’d never let go. I was pretty feverish by this time & don’t remember a lot of the next few hours -which is strange because for months of ambiguity drifting between friendship to brotherly affection I had fantasized something like this in great detail- well except for the part about being sick. Feeling naturally hot from fever wasn’t enhancing the experience. It  wasn’t quite like anything imagined in the months that led up to it.

Mercifully their were no dragon hallucinations which usually accompanied my fevers but the tattoo on her right arm was moving & tripping me out at an inconvenient moment. Probably just as well I would learn months afterwards that  I was part of a sexual rebound trifecta that week. Donna Marie had also hooked up with the ex-husband of one of my best friends. Ultimately she completed the week with Errol, who she would ultimately wed. I guess I made out as well as the Argentine Air Force- briefly achieving the realization of a dream; then watching it crash & burn.