Some time ago, about 22 years ago – I was seeking accomodation and was meeting with some friends at someone’s house.

A woman answered and said, “Pam! I have a spare room in Onehunga and you can flat with me!” I remembered reading in the New Zealand Herald the crime reports..

They were as follows

“Woman rapped in her 2 bedroomed flat by a Pacific Islander! Onehunga!”

“Girl robbed by a Maori who broke in the window!” Onehunga!”

“30 year old woman murdered by a Pacific Islander in her one bedroomed flat! Onehunga!”

The list was very long, as I had read these articles in the New Zealand Herald for years and they were written by New Zealand Europeans.

My immediate response based on sheer ignorance

“Im not living in Onehunga! Its full of Maoris, Islanders and thieves and murderers and rapists!”

Guess where I live now? Onehunga.

Its a wonderful place, and all races mix, nobody really cares what race you are. We are an international town. Maoris and Pacific Islanders, are not evil, most of them go to church on Sunday and are very moral people. However, in Onehunga you also have Russians, Georgians, Germans, French, Italians, Black Africans, English, South Americans, North Americans, White Americans, Irish, Scottish, White New Zealanders, a few White South Africans, people from Iraq, people from Persia, Serbians, Croatians, Indians, Fijian Indians, Chinese, people from different Asian countries, Bosnians, and no one really knows who else. You hear just about every language in the local supermarket.

No particular formula. Just talk to each other and learn to listen.

My neighbour is a Fijian Indian, a wonderful woman Rai. She has taught me some vegetarian dishes. Has a marvellous smile and gets on with everyone here. We have some Maoris in the village. I’ve had Maori neighbours as a child and have some Maori cousins. They were always nice people and had a wonderful sense of humour. I like them. Polynesians are a little different but also have a wonderful sense of humour. Polynesians also dress beautifully and go to church often. Also have a Chinese neighbour who grows a lot of vegetables, she is a wonderful person.

All shapes and sizes and colours. It is possible for people to get on.

I may be wrong, but even in the same races there is such a thing as greed. Greed is what is killing this earth not other people’s races. Greed of possessions, sex, money, wealth, things and power. You even see it in the business sector.

In fairness, I think that there are a lot of criminals in New Zealand, and often there are Maori or Polynesians. That is also a gang problem and gangs are everywhere in New Zealand, probably world wide. Crime often goes with poverty.

What is not reported is people in the office that look respectable and are not. My Dad was a bank inspector and caught crooked bank managers robbing Peter to pay back Paul. A bank manager does not own the money in the bank, they manager other people’s money and are trusted. When a bank manager robs people, they are exactly the same as any other crook – a thief who can not be trusted. They go to jail.

In a way, I feel that in New Zealand that the art world has closed ranks to keep anyone not like themselves outside. Its a very small nation and they do it , not because they love art. They close rank because of business reasons. For example, a collector of art does it by name, not the art work, they don’t even look at the picture at all. Just put it in a vault for investment.

The galleries don’t allow an artist to make any money for a living, they rob them openly by charging a huge rent for a month to show their work and by charging over 50% commission if they ever sell a picture.

No one likes to go to art galleries anymore in NZ because they hate the awful stuff they see hanging on the wall, its horrible. Investors buy it and the people who attend are business people who don’t care about whats on the wall. The only people whom I know that produce art work, are small artists who produce representational art or abstract art that is pleasing to the eye. Those artists never get paid for what they are worth.

Some do what is called Post Modernism. The moment an abstract is said to look like an egg beater or bird, is ceases to be called art in their terms. Modernism is something else. One guy I know of used to sell his Post Modernist work and then when no one brought it after a time, shoot the canvas with a gun 3 times. I wonder if that sold the painting?

One type of crook is inside jail and another type behind a desk in a huge company corporation. Whats the difference? Both steal.

These 2 pictures are not perfect but very quick iPad drawings done on Pixelmator by me. 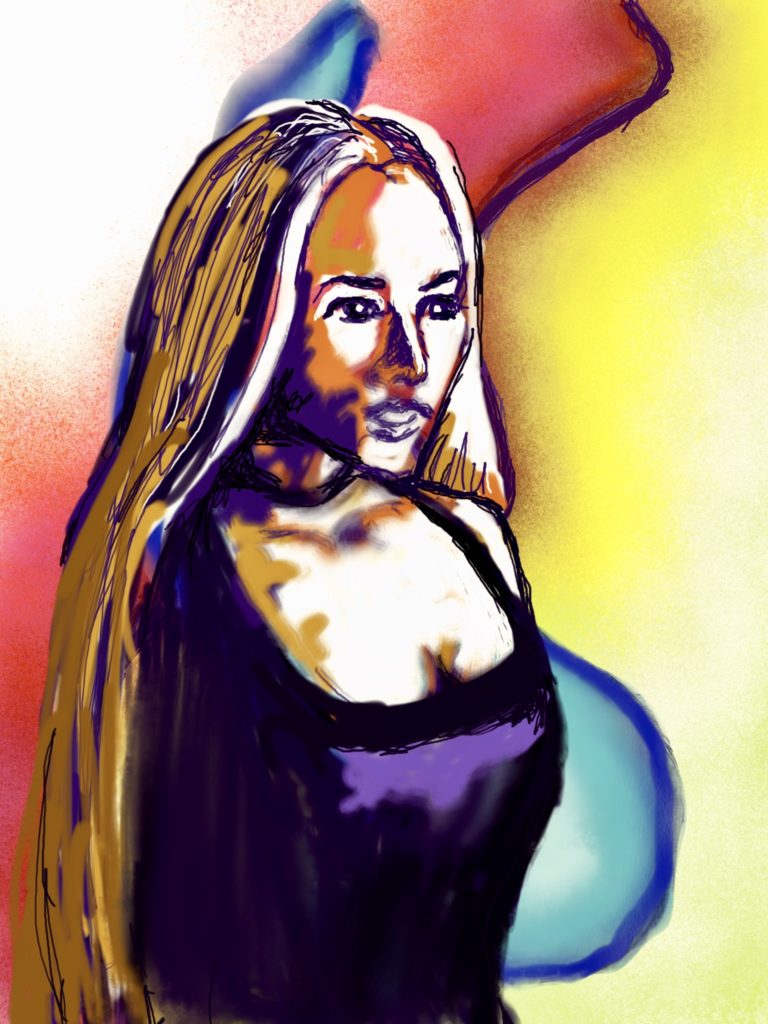