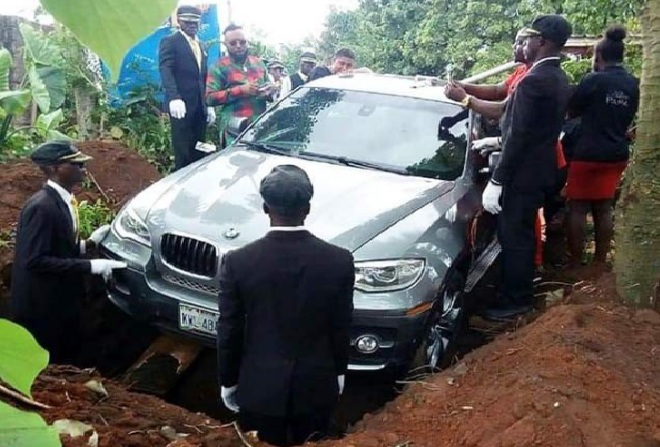 A person in Nigeria, following his father’s request after death, put it in a brand new BMW XFi and brought it to a grave, the car’s cost is worth a 82000 USD money.

The news stirred on social media when the person is being named as a Azobikey, His father died due to the complications of old age, Father advised that he should be buried in a car after he die. And on this same occasion, his son spent his deposit money while purchasing a new BMW and pulled his father into it, and then the car was carefully shifted to the tomb.

The special squeeze tomb was set to buried the car into a tomb, which was more than six feet deep. After the viral of the car picture on social media, people have criticized the process this funeral because Nigeria is a poor country and could spend money in a good place.

Another person wrote that Azobikey did not give him car in his father’s life. But after dying he kept them in a car and put them in the grave. Critics criticized on Facebook, another user wrote that the villages of Nigeria are deprived of water and health, and this amount could solve many problems of the poor.

It is fact that there is a great deal of appreciation of wealth in Nigeria, crores of wealthy people display extremely expensive cars and luxury goods.

Earlier, a billionaire Anigo of Nigeria had buried her mother in a Hummer Jeep (SUV).