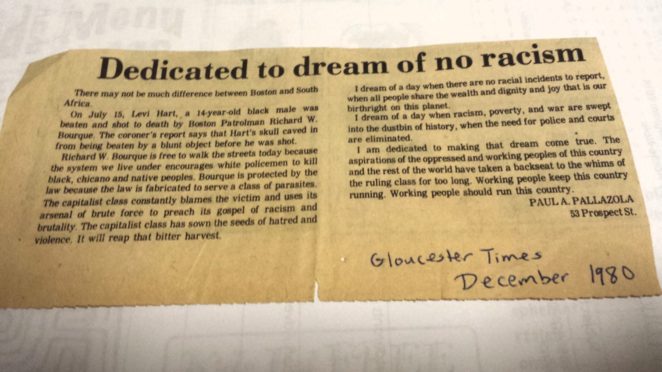 Early on the morning of July 15, 1980 an unarmed 14 year old black boy named Levi Hart was shot & killed by a white Boston Police Officer named Richard Bourque. I was a member of the Boston Chapter of Youth Against War & Fascism, one of the first community groups to demand a public inquiry into Hart’s death. On August 18th Roxbury District Judge Richard L. Banks announced that “ample cause” had been found that Bourque acted illegally in shooting Hart. Nonetheless a grand jury refused to indict the white policeman. I participated in community protests and forums denouncing the failure of the city of Boston to bring Hart’s killer to justice. Later that month I wrote a letter to the editor of the Gloucester Times that was published under the title “Dedicated to the Dream of No Racism”.