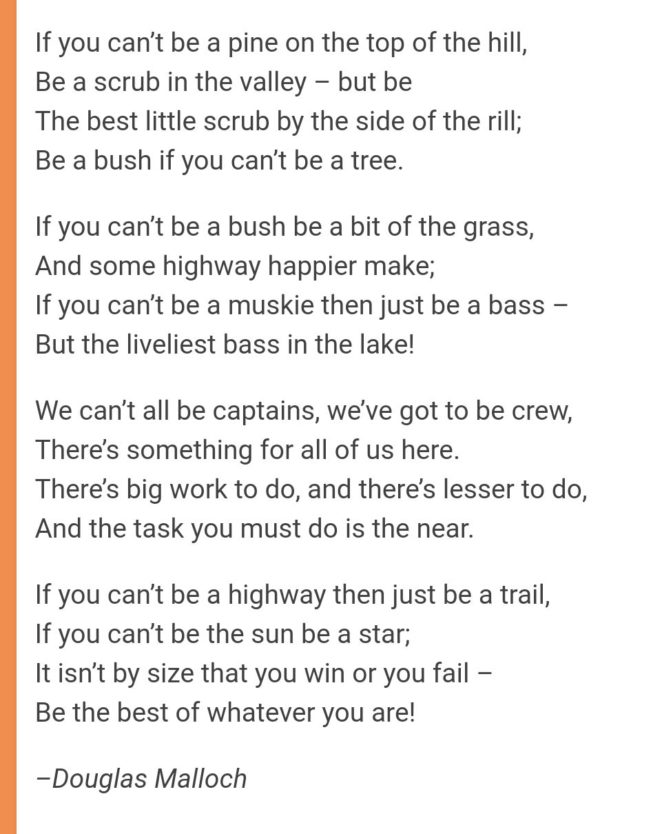 Earlier this year, I moved houses. While looking through all my things, deciding which to bring and which to let go, I chance upon a poster that used to grace the study room wall of one of our previous houses. It was a poem by Douglas Malloch. Whoever he is or was, my children and I’m are very grateful. Because of him, I realized that not everybody has to be a lawyer, a dentist or an engineer. The world also need street-sweepers, bus-drivers and sanitary workers to function. You only need to be at your best. Above is the said poem.

My eldest daughter, I would say, is the brightest in the family, but she was the laziest. Every teacher she had, would complain about her lack of interest in her studies; how she would be drawing instead of doing her work. I knew she wanted to become a fashion designer, but being a parent, I wanted her to have  a stable future. Being a fashion designer in Malaysia at that time, wouldn’t bring enough money for her to lead the life she’s accustomed to.

After reading the poem, I struck a deal with my children. I won’t pester them to study; instead at the start of the semester, I will ask them what they expect  their grades to be. They can revised their target as the semester progress with valid reason. When the results are out, I would ask them if they are satisfied with their results and why.

This took place when my eldest son was 12, eldest daughter 11, my second daughter 9 and youngest daughter 7. At first, they couldn’t handle the freedom and started to play instead of studying. As expected their grades plummet and they were put in the B class the next semester. Being award recipients for every semester, they realized that their future are now in their own hands, instead of their mother’s and their attitude towards their studies changed.

In Malaysia, everyone wanted to go into science stream as it guarantees their future, but my two elder daughters decided to do business. I stood by their decision when they applied to switch stream in high school, and went to see the principal when she didn’t approve their switch.

After graduating high school, I told them that they did not have to apply to the best university. If they think they can be accepted with their results, then do so. Else apply to lesser renowned university, as long as they get their desired course.

Currently, my eldest son has just been promoted to a senior engineer post, only 3 years after graduating and her sister has just become an assistant-manager, beating her seniors to the post, after 2 and a half years as a finance executive. She still dreams of becoming a designer but will only do so after she acquire skill running a business. The third is a finance executive, while her sister is doing her degree in computer in multimedia. The baby of the family will start university soon majoring in computer engineering.

Their secret: Be the best of whatever you are.