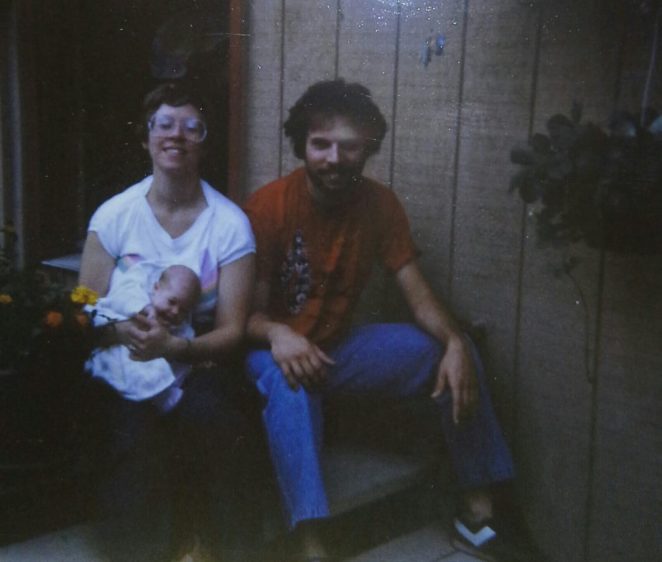 My brother in law Mark landed a job helping the State of Alaska plan for earthquakes. I was invited to come visit as he and Evelyn planned for the birth of their third child & I accepted, agreeing to arrive the last week in June for Annie Laurie’s christening. I was asked to be the godfather. There was some poetic justice in that. Half a lifetime before (May 1972) Evelyn had substituted for my oldest brother Joe who was supposed to be my Confirmation Sponsor/Godfather but couldn’t get the time off for work. Sister Mary Richard, the aging principal of Saint Ann’s Grammar School  suggested to my mom that Evelyn be Joe’s proxy since he couldn’t attend. I knew it would create an uproar for my sister to break the tradition of same sex sponsors (Wasn’t sure how that had slipped past Sister Richard) and was delighted. I was ambivalent about being confirmed with a group of classmates who had spent the year spitting on my lunches, boxing my ears, putting thumb tacks on my seat and bullying me in whatever new torture they could invent. I laughingly told my sister “You’re my Godfather now” and we went to the altar, I in my assigned confirmation gown and Evelyn in a sharp navy blue dress. The Bishop didn’t notice until it was too late, his face was red with rage and he briefly had to pause before continuing.

Thirteen years later I became Annie Laurie’s Godfather with much less drama and controversy, and a few Marlon Brando impressions after Church. Evelyn and Mark showed me around the  land of the midnight sun, and we had fun visiting a frozen glacier on a 65 degree June day. We went to the zoo and  harassed the llamas. I went to the Anchorage Mall, rode the escalators, went home and drank Yukon Jack. Alaska was fun. Nice place to visit, (in June anyway) but I wouldn’t want to live there.