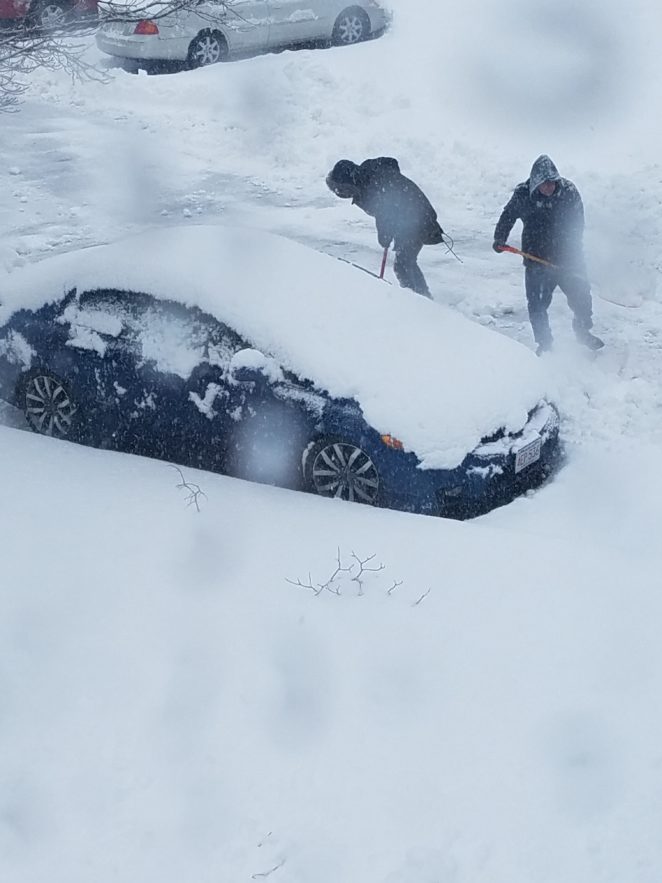 I was working at Heritage industries in Peabody. It was  snowing very hard & paychecks were being delivered because tomorrow everything would be closed. Work got out but the banks had closed. My car was burried in snow so I just left it on Foster Street  Chris Costello offered me a ride- she was having a blizzard party with a lot of our friends & coworkers. We stopped at a nearby liquor store where I bought a quart of Peppermint Schnapps & a pint of  Creme de Cacao. A few weeks before Paula Trabucco had introduced me to the “Girl Scout Cookie”, a drink made with these two liquors & milk. It seemed ideal for a blizzard party. We were h…eaded down Main Street Peabody when we saw one of the Heritage individuals wandering lost in the snow. Apparently he had become impatient waiting for the bus to take him to his group home. He left the Heritage parking lot intent on walking to his home (near the Salem/Swampscott line by himself. Thank God I recognized him. We drove him to his group home, what should have been a 20 minute ride.

It took an hour. After we had seen him safely enter his  home I cracked open the Schnapps bottle to guzzle a celebratory drink. By the itme we made It  to Chris’ s apartment I had half finnished the bottle.  Our friends were there & I started pouring “Girl Scout Cookies”. I don’t remember too much after that. I was lying on the floor playing Trivial Pursuit- paired on a team with my friend Paul Karras. We were winning. I only remember two questions I answered “Soviet Union”  for country with most movie theaters per capita & “Cleveland” for city with newspaper named “Plain Dealer”.I wasa so drunkI couldn’t walk. Jane Bagley put a blanket over me & I rested at her feet like a dog. I woke up the next morning on Chris’ s sofa with the worst hangover I had experienced since high school.  I have not touched Peppermint Schnapps since. I prefer the crunchy girl scout cookies that don’t leave you crawling to the bathroom.