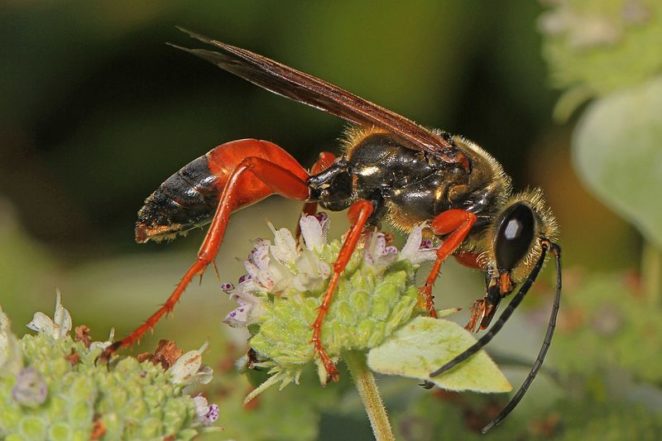 As an avid gardener and outdoorsman, I’m acquainted with most of the creatures that live around me. That includes insects. Imagine my surprise when I was out in the garden and saw a very large wasp I’d never seen before, flying between one onion blossom and another.

It was time to look in the field guide to insects to learn more about the creature and it turns out that this little gal is quite interesting. It is called a Great Golden Digger Wasp.

Although its sheer size, warning coloration, and the fact that it is noticeably a wasp are enough to make many people run away as fast as possible, this is actually one wasp you might want to have around. It isn’t even particularly scarce. It is more of a matter of me not having noticed anything like it before.

This wasp is different than most wasps in a few ways. It is much larger than most wasps here in Montana, for one thing. It is two to three times bigger than the yellow jackets and other paper wasps that we have here, and it is longer than the kind of bumblebees we have.

The coloration is also substantially different. Instead of the typical yellow and black, this wasp has orange to red legs and abdomen, with a black tip at the end of the abdomen. It also has golden coloration around the base of the wings. Actually, in as much as any wasp can be beautiful, this one is.

The habits of this wasp are unusual for wasps, putting it mildly. Unlike most wasps, the adult is quite happy to lap up nectar from flowers rather than eating carrion. In fact, it is quite docile, even more so than a bumblebee, and will usually only sting people if it is handled. Make no mistake; it can sting if it is molested.

The reason that this wasp is good to have around is two-fold. Since it laps up nectar, it can be a good pollinator. More importantly, great golden digger wasps don’t build or protect hives like other kinds of wasps.

Instead, they build tunnels in loose soil. They then sting an insect, very often a member of the grasshopper family. The sting doesn’t kill the grasshopper, it merely paralyzes it. The wasp then carries the grasshopper to one of its tunnels.

When the egg hatches, the larvae begins eating the grasshopper, which is still alive but paralyzed. This results in the death of the grasshopper, by the time the wasp pupates and is ready to emerge as an adult.

Thus, even though it is large and intimidating, it is extremely mild mannered, it functions as a pollinator, and it kills insect pests. It doesn’t harm honeybees and tends to fly away if people or animals get too close. It is a wasp that is useful to have around a yard or garden.