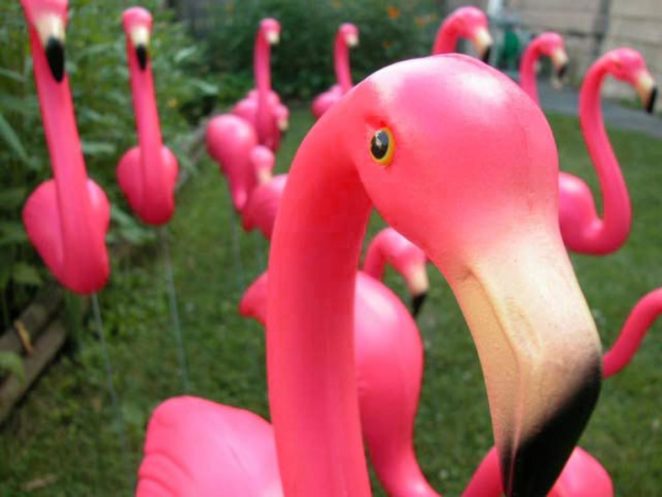 Most every object has a beginning or a history. Leominster, Massachusetts counted as the plastic kitsch capital of the world. So if it is anything plastic it probably comes from here.

At one time Leominster was known for the manufacture of combs. In 1774 comb maker Obidiah Hills founded his first business in this town. It was the time before shampoo had been invented and anyone had considered doing something about indoor plumbing. Yet, people want to look good and presentable so the Leominster comb that was hand-carved out of animal horns and hooves was just what everyone needed. Within the town limits, there were 24 comb factories by the time 1845 rolled around. Soon this town became known as “Comb City”.

The Age of Plastics

The problem with comb manufacturing was that the supply of horn was much in demand and not always available. Then in the late 19th century, Americans became obsessed with playing billiards. Practically every saloon had a billiard table and even President Abraham Lincoln declared himself to be a “billiard addict”. Billiards existed even during the Civil War. The problem was that the billiard balls were made out of ivory and it got to be very expensive to find enough of this material. Finally, in 1868 a competition was held where the winner was to be whoever discovered a new material out of which these balls could be made. The top prize was $10,000. The winners became two brothers who were inventors. Isaiah and John Hyatt worked together and created celluloid, a mixture of cellulose nitrate and camphor. It was the beginning of the age of plastics.

Joy and Sorrow for Comb Makers

Comb makers were also thrilled by this new material and it was the start of plastic factories. Now combs could be made on a production line and the Industrial Age stepped forward.  Then disaster struck for the comb making industry. It came in the form of a silent film star named Irene Castle, who at that time was the darling of the nation and also looked upon as a trendsetter. She did injustice to the comb industry when she cut her hair in 1914. Castle created what became known as the bob and soon about 20,000 women started getting their hair bobbed in Castle style each week. Due to the shorter hairstyles elaborated combs were no longer needed. Soon almost half of the comb factories in Leominster had closed.

The one good thing was that the comb industry had stepped into the age of plastics. Now there were injection-molding machines available in which plastic granules could be melted down and then the liquid placed in a mold and this allowed for the mass production of many inexpensive products. Leominster became known as the “Plastics Pioneer City” by the 1950s.

Donald Featherstone was a young art school graduate, who joined Union Products, a Leominster manufacturing firm. This company specialized in manufacturing two-dimensional plastic lawn ornaments but was hoping to begin on three dimensions. Featherstone was hired to accomplish this. He started off by creating a plastic girl with a watering can and then a plastic boy with a dog. After he had designed a duck he was asked to create a flamingo.

The Flamingo in Ancient Egypt In ancient Egypt, the flamingo was considered to be the living representation of Ra, the sun god. Perhaps Ra inspired Featherstone in some way because his creation caused quite a stir. Featherstone used pictures from the National Geographic to create his plastic bird, which was three feet high and bright pink. These flamingos were sold as pairs with one bird standing upright while the other bird had its head down. Soon these pink flamingos became a national obsession. Until the flamingo came along the most popular lawn ornament had been the garden gnome. It was unfortunate for the gnome that its roots were in the dark fairy-tale forests of Europe because the pink flamingo became an icon of the New World. Who knows, perhaps Ra as the sun god really had something to do with it as the pink flamingos decorated lawns all through the summers.

Flamingos As Far As the Eye Can See

Soon there was a great demand for pink flamingos on lawns all across the country. Even in this new century, the flamingo has a say and Madison, Wisconsin named the flamingo as its official bird in 2009. Unfortunately, you either loved them or hated them and soon they became an emblem of kitsch, for the post-modern grotesque. Pink flamingos were immortalized in music and the movies. John Waters’ infamous movie “Pink Flamingos” came out in 1972.

In 2006 Union Products closed down and at that time it was estimated that they had manufactured over 20 million pink flamingos. As for Leominster, it has been transformed into the capital of collectible debris, the spiritual birthplace of all knickknacks and doodads. Be of good cheer if you want to jump on the bandwagon even today you can still purchase your very own pink flamingo online.