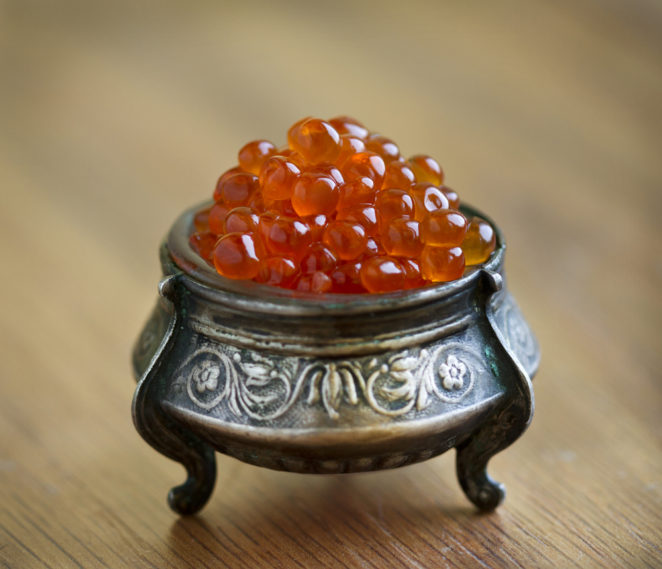 Caviar is the one thing that most people can do without and then there are those who love it but can’t afford it. There are those who say that caviar is an acquired taste. Whatever your thoughts on caviar it does have a fascinating history. The time I first ate caviar I wasn’t too impressed but then I was taught how to eat it and enjoy it and I have loved it ever since. Of course, I have no idea when I will be able to eat it again since it is so very expensive but at one time long ago I did have the pleasure to have champagne and caviar.

Caviar is the processed salted roe of different types of fish. The fully ripe egg masses of the fish are roe. It consists of a pair of ovaries – the membranes or sacs that hold the eggs. Connective tissues hold the eggs to each other and to the sac. The fish eggs are taken and separated from the connective tissue of the ovaries, passing them through a mesh screen in order to produce caviar. Afterward, they are salted and pasteurized.

Beluga, Osetra, and Sevruga are the three most valuable kinds of caviar:

Russian Caviar from the Sturgeon of the Caspian Sea

The three most well-known kinds of caviar – beluga, osetra and sevruga come from three species of the sturgeon which makes its home in the Caspian Sea. The sturgeon is a large fish that dates back to prehistoric times. Already as far back as 250 million years ago, sturgeons swam in the world’s rivers. Today they live exclusively in the waters of the Northern Hemisphere. What is most interesting about sturgeons is that while they are anadromous (living in the sea) they have to take a journey to a river to be able to spawn just like salmon. These fish are best suited for living in estuaries where salt water mixes with fresh water and they can also find many food sources there like crayfish and worms. The reason sturgeon do so well in the Caspian Sea is that this sea is more like a salty lake due to the Volga River pumping fresh water into it. Like the creature of the deep, the sturgeon is a monstrous looking fish. It has a large bloated body that is covered with a protective bony mantle. Along its sides and spine are five rows of hard plates. These plates resemble the ranges of tiny mountains with peaks that are sharp enough to cause injury to creatures that are less hard-bodied. The sturgeon can deliver a mighty blow with its big shark-like tail and it has an enormous head with no jaws or teeth. It sucks up organisms from the river and sea bottoms with its lips. Amazing as it may seem due to its constant eating habits as it gets older the sturgeon get larger. The beluga is the largest of all sturgeons and it can live for over a century and be twice as long as a pickup truck. The largest beluga on record weighed 4,570 pounds and 28 feet from head to tip of the tail.

Caviar was first mentioned in 1240 when the Mongols conquered Muscovy. Batu Khan the leader of the Mongols visited an Orthodox Christian monastery in Uglich located in the north of Moscow. The monks wanted to please the overlord so they served him a special meal that ended with hot apple preserves topped with salted sturgeon eggs. Caviar first became popular in medieval Russia as a religious dish for Orthodox Christians. It worked out just right because when meat and other delicacies were forbidden during religious feasts caviar, sturgeon, other fish and fish products could be consumed. Therefore caviar was food for both aristocrats and peasants.

Every aspect of Russian life was governed by the Russian Orthodox Church in the 13th century. It was stated that Orthodox Christians had to give up eating meat for two hundred days a year. Sturgeon became a sought-after food since it has lots of meat and it was nutritious. Unfortunately, this fish was expensive and peasants could only afford the roe. Once the church officially sanctioned caviar as a food for fasting if was easier for peasants to follow along with religious doctrine. However beyond the borders of Russia caviar was not well-known. Only occasionally would shipments of caviar be sent to other European countries like England, France, and Italy. Since caviar was terribly salty and smelled strong when it was warm kings usually found it revolting.

Changes Due to Technology

In the 19th century, both steamships and refrigeration were invented and this allowed caviar to be shipped to different parts of the world much quicker and be delivered in better condition. The downside of this was that caviar prices rose. Being an expensive and sought-after food caviar appealed to the bourgeoisie in Europe. The Industrial Revolution provided people with more money and at the end of the 19th-century merchants and manufacturers were ready to pay any price for caviar. One of the biggest draws to Russian caviar was that it was associated with the wealthy Russian aristocracy. As railroads began to stretch all across the European continent Russian nobles started visiting European cities like Paris and Berlin. Western Europeans were fascinated by the Russian aristocracy and their extravagance. As time went on caviar became a luxury item in Russia instead of sacred religious food. During the reign of Catherine the Great caviar became associated with Butter Week (Russia’s answer to Mardi Gras) just before the start of the pre-Easter fast. Soon caviar became part of the table of appetizers known as zakouski for wealthy nobles, rich merchants, and state officials. However common people could still afford caviar because it was the same price as butter. By the end of the 19th century, caviar started to become a food that only the elite and wealthy could afford. As the shadow of the impending Russian Revolution loomed over the country caviar had become a symbol of the growing disparity between the poor and the rich.