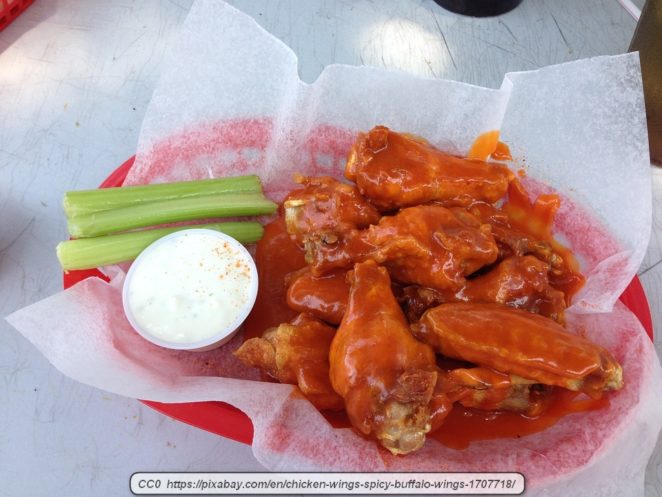 Buffalo wings are undeniably popular throughout much of the United States and there are a number of variations of this dish. They can often be purchased, premade and frozen, in stores. They also aren’t particularly hard to make from scratch. For many, it is hard to even imagine watching a football game without some Buffalo wings to snack on. However, many people might wonder what the history of this dish is.

It is normally accepted that Buffalo wings were the invention of a woman named Teressa Bellissimo, in 1964. The location was in a family owned business in Buffalo, New York, called Anchor Bar. It is fairly certain that the first plate of these wings was cooked in Teressa’s own special sauce and was served with celery and blue cheese. It is doubtful that Mrs. Bellissimo had any notion that in less than 50 years, these snacks would become such a mainstay for Super Bowl parties, tailgating parties or that they would be sold pre-packaged in supermarkets.

Reason for the invention

According to Teressa’s husband, Frank, the recipe was devised when the bar got a large shipment of chicken wings, rather than cut chicken, which they had ordered. If true, it would mean that they would need to find a way to produce a dish from the excess wings, which apparently led to the recipe.

Teressa’s son, Dominic, claimed that the reason was different, though. According to him, the dish was a snack his mother whipped up late one night, at Dominic’s request. Still, it is widely acknowledged that Teressa Bellissimo came up with the idea, originally, regardless of why.

At first, relatively few people probably knew about the delicious morsels. As with many great recipes, though, it wasn’t much more than a decade before people were creating their own versions of Buffalo wings. Quite a few businesses and individuals who have claimed to be the originator, in fact, staked their claim in the late 1970s and early ’80s, well after the first plate of Buffalo wings was served.

Variations on the recipe

While these people and businesses can’t say that they were the first to come up with the idea, it is quite possible that they did come up with their own sauces. The total number of ways to make Buffalo is staggering. It is likely that more will be created. This dish can now be found with sauce hot enough to make the eyes water, to sweet and sour, to ethnic flavors such as Chinese and Japanese.

Adding to the history

Many great cooks add to the history of the wings by producing their own sauces. They may not be acknowledged for it nationally, however, one of the great things about this dish is that it is easily changeable. It is so easy for a person to make their own version that there is even a National Buffalo Wing Festival featuring, as they put it, “Over 100 flavors.”

For something that tastes so good and is so well known, it is surprising to many that the original Buffalo wings recipe is less than a half a century old. This can be fun trivia to explain during the next tailgating party or during the halftime of your next game day with friends. Remember, though, that this dish is a wonderful snack even for those who don’t watch football, and they can be served almost any time of year.