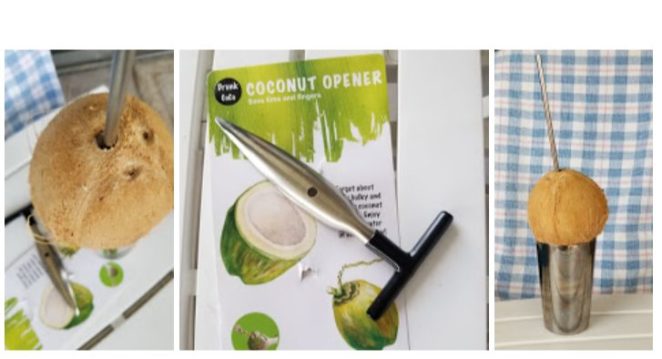 Some of the stores near me were charging four or five dollars for a fresh young coconut like this. To get us hooked, they even passed out coupons for one free coconut, which they opened for us. I held off for a while not wanting to get addicted to something that pricey even if they were delicious and nutritious. Then I noticed that the 99 Cents Only Store was carrying them. This motivated me to try one of the freebies (yes, hooked immediately) and then to go online and learn how to open one for myself, and then off to get a cartful for less than a buck apiece. Wahoo.

It takes about 3 seconds to open one, and you don’t really need a fancy tool like the one I bought, but this makes a very clean cut and paid for itself really fast. If you haven’t opened a young green coconut before, note that there are 3 indentations at the top. If you press lightly against each of the indentations you will find that 2 of them are hard and 1 is soft. Just push through the soft one and twist the tool, whether it is a special gadget like this or a flat screwdriver, then drop a straw into the hole and enjoy. I like the coconut juice nice and cold, so I put the coconut in the refrigerator overnight before tapping into it.

The flesh of a green coconut is soft and delicious, and not that hard to get if you know a few tricks. First, there are some weak spots around the side that tapping will cause the hard shell to pop open. Then you can scoop out the flesh with a large spoon or curved knife.  Some people use a linoleum knife. Finally, to separate the soft white flesh from the thin brown bark, most of it will pull right off, but I just scrape over what is left with a serrated vegetable peeler, the same one I use to peel tomatoes.

If you drink the juice out of your coconut, but want to save the flesh, it will keep a lot longer in the shell, enclosed in an air-tight bag, than it would if you peeled it before storing.