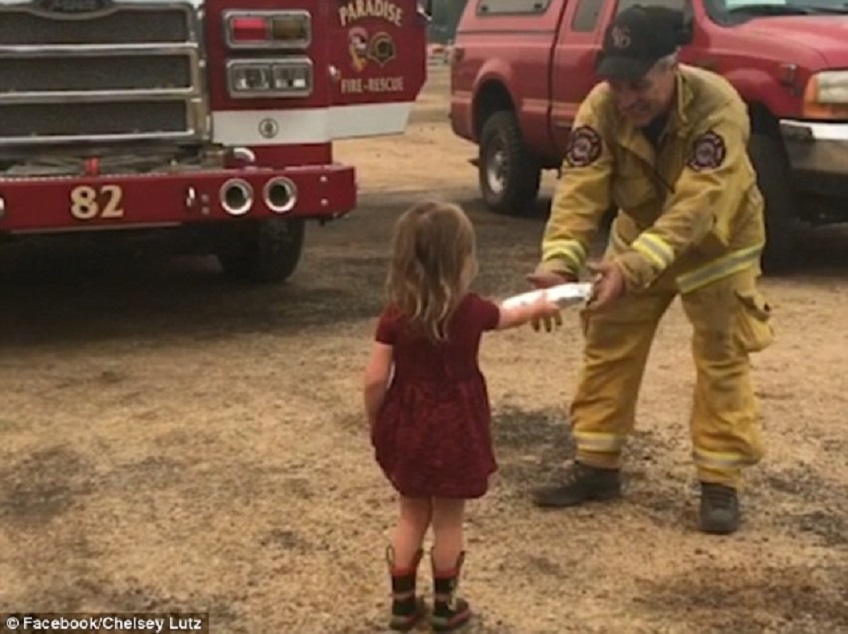 Even though the Carr Fire is making headlines due to the loss of life of six persons not to mention the loss of homes in the Northern California which caused heartbreak of the persons who lost their homes, there is some good news coming from this tragic event.

Chelsey Lutz who has two of her brothers and her dad who are part of the firefighters crew that are doing their best to control the fire that has damaged the Northern California area, is doing her part along with her two year old daughter Gracie who was filmed by her mom handing out free burritos to the firefighters as a way of saying “Thank you” for their service.

Colton and Kody Lutz who are the brothers of Chelsey and the uncles of Gracie as well as Jerry Lutz who is the father of Chelsey, Colton and Chelsey finished their graveyard shift on Monday when they came home to get some breakfast from Chelsey since they were hungry.

Gracie did her part to feed her grandfather and her uncles with the free burritos on Monday morning.

I am sure that there are going to be some doubters that Chelsey is doing making the burritos for the firefighters since three of her family members are firemen.

However when a tragic event happens like a Carr fire happens in North California, the chances of common people to do great deeds to assisting the firefighters get fed after their hard day or evening shift fighting fires is one way to repay the great deeds to save lives.

The images of Gracie feeding the fire crew appeared on Facebook on Monday which has made the Lutz family famous. Social media is great for reporting the good news.