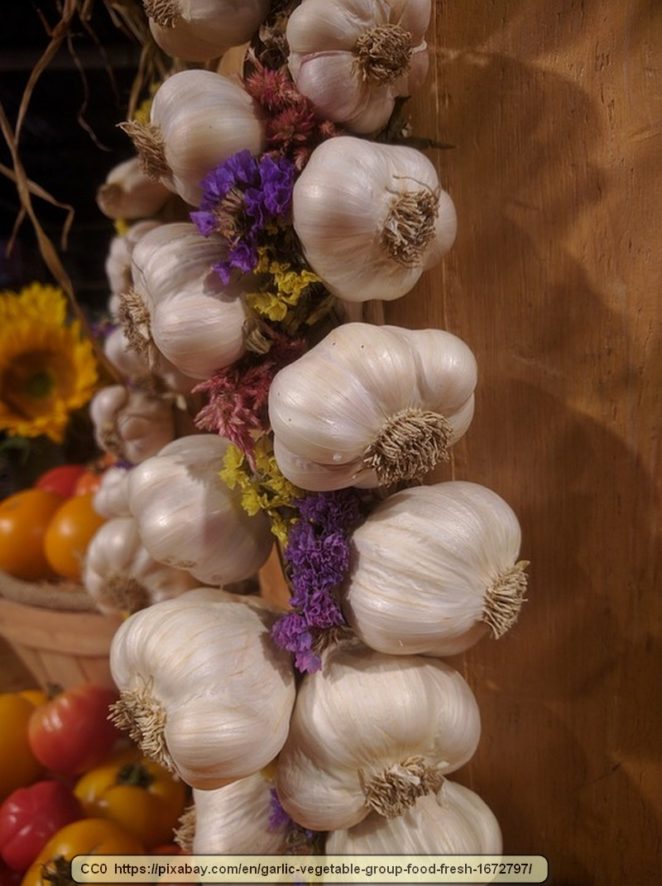 A lot of people cook with garlic. Quite a few people also grow garlic because it is easy to grow, it takes little care, it doesn’t take much space, and it can even be grown in pots. However, what most people don’t know, particularly in the US, is that there are more than just one kind of garlic.

There are a couple of reasons people don’t know that there is more than one kind of garlic, in fact, as many as 600 different kinds. First, and probably most importantly, only one kind is commonly sold in stores. Second, the various cultivars are subspecies, so there is only one species of Garlic, Allium sativum.

The species has two main subdivisions, though; hard-neck and soft-neck garlic. Soft-necked garlic isn’t naturally occurring. It was specifically bred by mankind.

Most of the cultivars of garlic are hard-neck varieties.

The generic name of Allium should be recognizable. This is the genus that includes all members of the onion family and garlic is a member of that family. Although this is commonly called the onion “family”, Allium isn’t actually the family, it is the genus.

The family is actually Amaryllidaceae, which is the lily family.

Still, the Alliums include onions, garlic, chives, leek, and shallots. They are closely related, enough so that some are mistakenly called garlic, though they aren’t garlic at all.

For example, Elephant Garlic (Allium ampeloprasum) isn’t garlic. It is a kind of leek. Wild garlic also isn’t garlic, though it smells and tastes like garlic. Yet, many people, if not most, think that elephant garlic really is garlic because of the large bulbs.

Incidentally, for those who haven’t cooked with garlic yet, a bulb of true garlic consists of many bulblets, called cloves. Thus, a clove of garlic is a reference to one of the small bulblets. There have been quite a few people who, when reading a recipe that called for three cloves of garlic and mistakingly putting three bulbs of garlic into the meal. For garlic lovers, this might not be a bad thing, but for most people, the meal would have the overpowering flavor of garlic.

Although only one to three cultivars of garlic are commonly sold in stores, many more kinds are grown in home gardens. Some are even grown for decorative purposes or because garlic has the trait of repelling many garden pests, such as aphids. It is an old gardener’s trick to plant garlic next to roses, for instance, since roses are prone to aphid attack and the garlic repels the aphids.

Garlic is also sometimes grown in the US for commercial sale. However, the total commercial production of garlic in the US doesn’t come close to the world leaders in production.

No country produces more garlic than China. In fact, China is easily the world leader in commercial garlic with over 20 million metric tons of garlic grown yearly. The second place country is India and they only grow about one and a quarter million metric tons. That is a great deal of garlic, but nowhere close to the amount grown in China. Part of this could be that garlic plays a big part in oriental cuisine.

Garlic will keep for a very long time, provided that it is kept cool and dry. Keeping it dry is a must, though. For this reason, garlic should not be stored in the refrigerator. Refrigerators usually are a moist environment and although the temperature usually discourages the garlic from sprouting, it provides enough moisture for them to rot.

There are three really good ways to keep garlic almost indefinitely, though. In all three cases, the garlic cloves should first be shucked. The cloves can then be put in zip-lock bags and kept in the freezer. The cloves can also be put in a jar and covered with olive oil. The third way is similar to the second, except that it is kept in vinegar instead of olive oil.

Using olive oil or vinegar has a secondary benefit. The oil or vinegar becomes flavored by the garlic and this can be used in cooking. The garlic infused vinegar or olive oil can be great for giving as gifts to people who do a lot of cooking.

Raw garlic is a strong mosquito repellent. The night before going out where there are lots of mosquitoes, eat one or more raw cloves. The garlic oil is normally exuded the following day as you sweat and this helps to repel the mosquitoes. You can also crush cloves of raw garlic and smear it on your skin to repel biting insects. As the late naturalist, forager, and plant expert Euell Gibbons said, “Garlic repels fleas, ticks, mosquitoes, chiggars…and friends.”

Additional trivia,; the leaves of growing garlic can be used the same way that green onions can be used. They are superb when chopped and added to green salads or when only a hint of garlic flavor is desired.

Especially if you plan on planting and growing garlic, don’t get caught in the trap of thinking that there is only one kind of garlic you can grow. With around 600 kinds to choose from, you have a lot of variation that is available. Finding different varieties to grow can be a little more problematic, however.