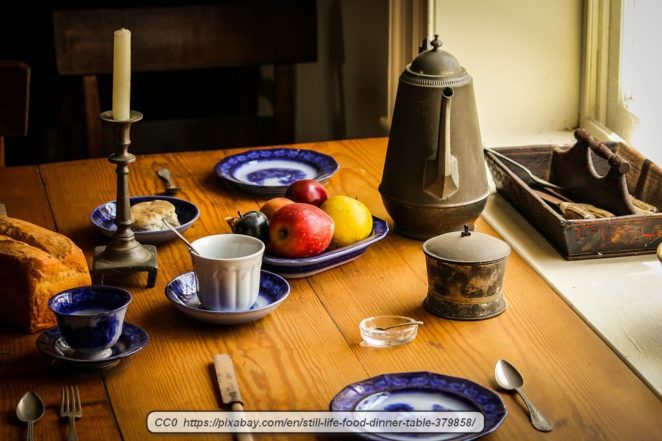 There is a very common fallacy that you can’t eat a healthy diet if you only have a small food budget. The truth is actually the opposite; it costs more money to eat a diet that isn’t healthy than it does to eat one that is. Let’s look at how this is possible.

Package mixes bought in a store are not only unhealthy, they are more expensive in nearly every case. Sometimes it might seem like you are getting a great deal, but really, you aren’t. Many examples could be cited, but just to select one, look at “Rice-a-Roni”.

Even if this is a generic version, the box contains around 3/4 cup of rice and a flavoring packet. The box might seem like it is a good deal at 79 to 96 cents.

However, five pounds of rice costs less than $2.50. There are two cups of rice per pound. That is enough for about  13 boxes of homemade rice-a-roni. The seasoning is simply chicken or beef bouillon. Thus, by making your own, you can expect to pay around twenty five cents or less. That is a savings of over 50 cents for something that is healthier.

The same is true of any kind of packaged mix, from hamburger helper, to cake mixes and even pancake mix. The savings for most mixes will be around 75% to 90%. Making it yourself also means that you control additives like preservatives and salt, so the food is healthier.

Make your own seasoning

Specialty seasonings are rediculously expensive. As an example, poultry seasoning can cost up to $5 for a bottle. Yet, you can make your own for a fraction of this. The same thing goes for taco seasoning, enchilada seasoning, chili seasoning, and so forth. Making your own means that you don’t have to have preservatives and things like silicon dioxide (sand) that is added to make them pour more easily.

Fresh vegetables are nearly always healthier and cheaper than canned vegetables, particularly if they are purchased in season. In fact, during peak season, the fresh vegetables can be substantially cheaper.

It is worthwhile to take the time to learn how to home-can your own, too. Initially, the cost is high because you need to buy the canning jars, lids, and rings. However, the jars are used repeatedly, which greatly drops the price. Canning is incredibly easy to do, too. The time and the effort are worth it, if you want to save on the money bill.

As a rule, whole chicken costs more than cut chicken. You can save money by learning to cut up your own chicken. It isn’t difficult and just takes some time to master.

Likewise, boneless roasts usually cost less than steak. You can cut your own steaks and chops by buying a roast and saving money. This is also a great time to trim off extra fat, which makes the meat healthier.

Also, don’t believe that larger cuts of meat won’t be cost effective. It isn’t uncommon for stores to charge substantially less per pound for a large roast than a smaller one. You can cut a large roast into two or more small roasts, to save money.

Additionally, buying a turkey is often cost effective and it doesn’t need to be a purchased only for late in the year. Once cooked, the turkey meat can be put into zip lock bags and can be frozen for later meals. Our family of three were able to have 7 nice meals from a 10 pound turkey, without really trying to stretch it. The price per pound was just under a dollar, so we had 7 main courses for a bit less than $10.

If you are trying to save money, buying brand name food is usually not a good idea. If fact, it often serves no purpose. For example, people might pay more for a package of Bird’s Eye brand or Green Giant brand frozen vegetables than a generic brand would cost. Yet, there is absolutely no difference in the quality of the vegetables.

In other words, Bird’s Eye may order 5,000 bags of frozen sweet corn. Green Giant might order 2,000. Western Family, a generic brand, might order 3,000 bags. All of the bags are filled from the same bin, so the only difference is in the bag that they come in. Unless you are in the habit of eating the bag, you might as well save the money and buy generic.

Better still, get fresh vegetables and freeze your own or can them, as already mentioned.

The bottom line is that eating healthy doesn’t mean that you’ll need to spend more. In fact, it is likely that you’ll save money. This doesn’t even count the savings you’d get by growing your own herbs, vegetables and fruits, or purchasing them at a local farmer’s market, which also helps the local economy.

There are so many ways that you can save money on food and eat far healthier. People who only have a small amount of money for the food budget should be the people who are eating healthiest of all.