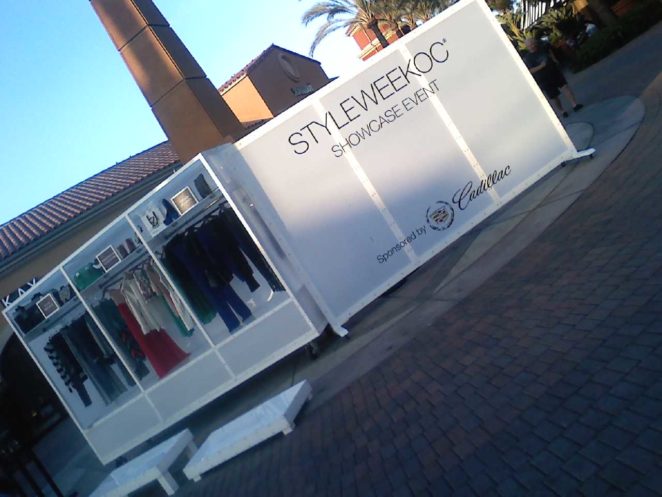 I am Fifi Leigh, Shadow Paparazzi, scoping out events for interesting scenes to photograph. As I walked under the hot sun, I was happy that I wore my wide-brim sunhat and sunglasses.

As I walked around at the OC Style Week event at the Spectrum Center in Irvine, California, I noticed signs promoting two bloggers/vloggers. I have never heard of them, but I was curious to check them out.

Then, I noticed two very long lines that seemed to snake around the Ferris Wheel and event booths. The fans looked very young.

Many bloggers and vloggers have created a name for themselves on Youtube because of their large group of followers. At two Style Week OC events during 2013 and 2015, I noticed long lines of young people standing for an autograph and a photograph. I decided to go on a Ferris Wheel ride to check out the event from a bird’s eye view.

I assumed it was a celebrity, but I later found out it was Youtube fashion bloggers. I am on Youtuber, and I have checked out different people’s fashion videos, but I have never heard of these bloggers/vloggers at this event. It was interesting just to watch them, take photographs, and make a video about such events, as a Shadow Paparazzi, studying the interaction between famous bloggers/vloggers and their Youtube followers/fans.

Each blogger/vlogger is by seasonal fashion capsules from three particular stores that they probably promote in their videos and blogs for particular seasons.

Such seasonal wardrobe capsules involve organizing one’s closet with particular clothes and accessories for that particular season. It involves only choosing certain styles and colors that are most popular for that season. And, you other clothes and accessories can be stored for next season’s wardrobe capsule. You closet will likely be more organized with minimal clothes and accessories that you will likely wear for that season, and you will likely be able to easily see everything without having to dig through piles of clothing and items trying to find a particular item, which is likely to be hidden between or under other clothes. (Although these capsules are just used to promote certain merchandise for specific stores, you can create one to better organize your closet. But yours might not be this small and minimal, unless you want it to be).

I heard music from a band playing in the background, which entertained many young people as they stood in line waiting for their turn with their favorite blogger.

In this three-store capsule, notice certain clothes and colors are being promoted. There are lots of blue, as well as some red, green, and a couple of neutral colors. There are som prints, mostly striped, polka dots, and a couple of colorful prints. Certain shoes, purses, and jewelry are promoted with these selected clothing. It is so organized that it reminds me of IKEA products.

An OC blogger/vlogger Ally arrived, and she did some modeling on a platform by three OC Style Week fashion capsules promoting certain stores. (She is the blonde girl in the bottom snapshot).

The blogger/vlogger Ally was interviewed on stage for her followers and fans who attended this fashion event.  (This video was made on my old cellphone, LG 2008, and it isn’t as clear as my iPhone videos. But the sound is clear. It is interesting to listen to how she answers certain questions from fans because some of her answers are interesting).

At the end of the end, I decided to stop by the photo booth for a selfie picture.