So when has The Best Picture Oscar winner ever been the best film of the year? It’s simply not the case, as is the case here. The big Oscar winners tend to be released right on the envelope when entries close for the big awards nights so not to expose them to an actual judgmental public audience too much. What do they know? Then they are heavily lobbied at the Academy voters and a snowball effect takes them to glory as critics feel obliged to support other critics as it’s their sort of movie. White middle-aged men decide your movie reviewing folks.

The Shape of Water went big at those awards ceremonies with 13 Oscar nominations and went on to win 4 golden statues, including Best Director for Guillermo del Torro. I believe this is the first Science Fiction Film to EVER win Best Picture at the Oscars. The famous Spanish director wrote this movie with English actress Sally Hawkins and lugubrious American Michael Shannon in mind. According to Imdb.com., director Guillermo first pitched the film to Hawkins while he was intoxicated at a film festival and reportedly said, “I was drunk and it’s not a movie idea that makes you sound less drunk.” The monster featured in the film is based on the Creature from the Black Lagoon.

The movie, however, was one of the better Best Picture Oscar grossing film of late, grossing over $194 million worldwide on a budget of $20 million, the best gross for five years of Best Picture. Strangely this is one of three movies that features actor Michael Stuhlbarg that was nominated for the 2018 Best Picture Academy Award. The other two are Call Me by Your Name (2017) and The Post (2017).

It’s Cold War 1960s America and dowdy mute Elisa Esposito (Sally Hawkins) pushes a mop for a living at a top secret government laboratory in Baltimore, Maryland. She was found abandoned and disoriented as a child at a river bed with deep scratch wounds to her neck from an unknown assailant and now communicates through sign language, living alone above a cinema. Her only real friends are her middle age gay next-door neighbor Giles (Richard Jenkins) and co-worker Zelda (Octavia Spencer), who also acts as her interpreter a work.

Then one day things get interesting for Eliza when the secret facility has a mysterious creature that was captured from the Amazon River shipped into the lab in a sealed water tank, the creature frantically thrashing at its temporary prison. It was captured by Colonel Richard Strickland (Michael Shannon) and he is put in charge of the team to study it. Strickland is not a nice person and sees it as a wild beast and treats it accordingly, brutally so, then shocking it with his electric cattle prod when it’s chained up in a bigger habitat pool to amuse himself. 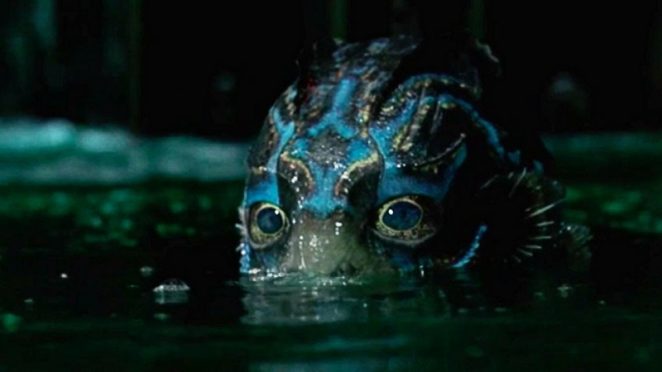 Curious about the discovery, Elisa snakes into the tank room and discovers the male humanoid amphibian (Doug Jones) thing. It’s human like in some ways and seemingly thinking and emotional. They seem to have a rapport and she begins visiting him in secret and they form a close bond as she teaches him sign language so they can talk and listen to music and stuff together, slowly falling in love with it, it seems.

Bored of trying to tame it, General Frank Hoyt (Nick Searcy) is persuaded by Strickland to cut it up for medical science so its workings can help in the Space Race somehow. Scientist Robert Hoffstetler (Michael Stuhlbarg) is not happy with that and pleads his bosses to keep the Amphibian Man alive for further study. But he also has a loyally to another master and ordered by his handlers to also kill the creature but steal it as well. When Elisa overhears the American plans for the Amphibian Man she is distraught. Sensing her discomfort and knowing about her liaisons with the creature, Hoffstetler realizes Elisa’s emotional connection and chooses to help her plot its escape. Though initially reluctant, Zelda also becomes entangled in the plan. 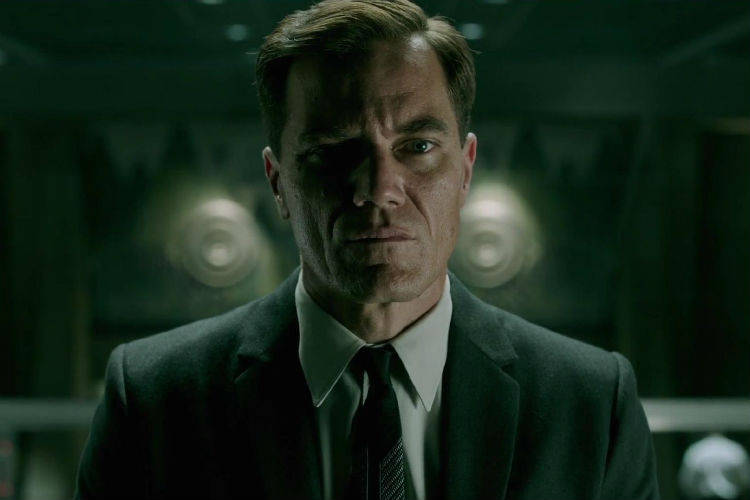 The last time I walked out the cinema happy and entertained after seeing the Best Picture winner was Slumdog Millionaire some ten years ago. The Big Short was the last one I loved that was nominated but didn’t win. The Academy tried to popularize Best Picture with ten nominations on the day going for the gong but it still produces rather arty safe winners that appeal only to the critics.

Like most Oscar winner in the modern age this is competently acted and looks good with plenty of plush visual metaphors and emotional performances. The Spanish director is one for detail and vulnerable lead characters when on form. Del Torro has only made ten movies in his 25 year career, including Blade 2 and Pacific Rim, not exactly the type of director you would expect to win Best Director. His early history was Gothic subtitled horror but those days are long gone.

I enjoyed it to a point as the mystery unfolds and the excellent turns by Hawkins and the always entertaining Michael Shannon dominate the film. It’s no real surprise the film for the Oscar attention it did as it deals with those #metoo issues of vulnerable and powerless women. As we know these days Hollywood is very political and reacts to the issues of the day with its nomination lists. You do sense studios and directors are tapping into that and releasing films on those topics.

It did that $194 million so someone liked it although, like the list above, not a film you would see again in a hurry. In the 1970s you would watch the Best Picture winners over and over again until the present day, The Godfather 1&2, The Deerhunter, Rocky, The Sting , One Flew Over the Cuckoo’s Nest and The French Connection…