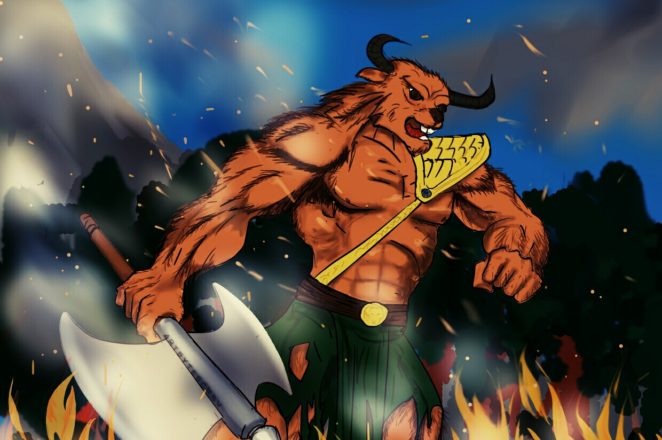 Dawn. She woke up realizing that her bull-headed rescuer is no longer in the cave. She went out of the cave. The sun was rising but dark clouds looms over the horizon. She saw the Minotaur coming out from the thick forest. A full grown deer lugged on his broad, furry shoulder. She waved to him.

All of the sudden, the Minotaur stopped on his tracks. Turning towards the forest, he dropped the deer to the ground. He sensed danger!

She heard voices coming out of the woods. Shouting, screaming in anger! One of her pursuant from last night returned with an outraged mob from the town.  Her eyes widened in surprise when she saw a volley of arrows flying towards the Minotaur. Some of the arrows are flaming!

The Minotaur used his broad axe as a shield, blocking some of the arrows. Some hit him on his right arm and leg, bouncing off his thick hide. Some missed him. But, the flaming arrows started a fire on the dry bush.

He belt out a large roar and charged towards his aggressors! However, the humans threw the torches on his path, starting another fire. Then they released another of arrows against the creature. Once again, the arrows merely bounced of hiso  hide. The humans threw their spears. Heavier than the arrows, the spears were able to at least scratch his hide.

He snorted and roared not in pain but in anger! He tightened his grip on his axe, ready to charge through the fire. However, as he make his first step, his right leg felt numbed! The wound was shallow, but felt strange…. POISON! The spears must be poisoned! Numbing his right leg… Slowing him down.

She screamed and started to run towards the humans. She wanted to stop them. But there were three men already waiting outside the cave. They grabbed her and gagged her.

The poison is slowly spreading in his body, slowing him down further. The fire is growing making a barrier between him and the humans. However, the fire also blocks his way to the woman who is being dragged against her wishes.

The humans threw their knives, clubs, pitch forks and all sorts of weapons they are carrying to him. An axe hit him on the chest. The wound was not deep but it was long. He had to run. His wounds and the poison weakens him by the moment.

He barely did Fifty steps when he totally lost his feeling of his feet. He fell down into a pool of mud. The poison already paralyzed his whole body.

While the  humans can’t pursue him through the growing fire, they saw the beast fell. They were convinced that the poison, which was strong enough to kill two full grown elephants would finish the beast.

They turned back towards the town dragging the woman with them.

Wrath of the Raging Minotaur Part 1

How I Created My Minotaur using MediBang Paint