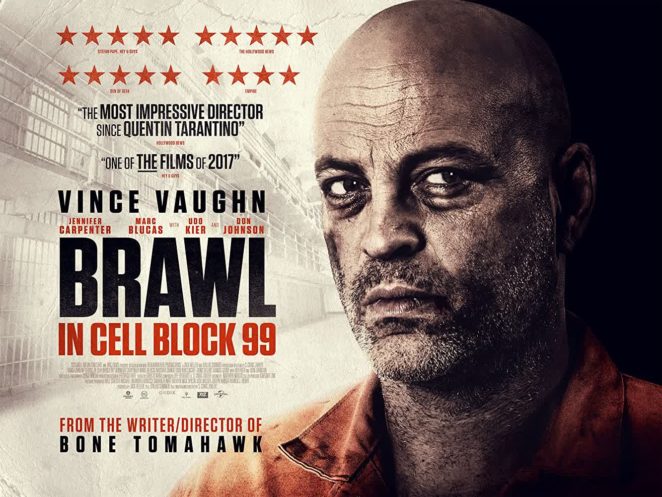 It’s fair to say Vince Vaughan’s movie career has not been great. He arrived with the brilliant Swingers with his big mate John Favreau but, like Adam Sandler after Happy Gilmore, quickly descended into mediocrity. Favreau was more realistic and had a face for writing and directing and excelled in that. So it was real surprise when a somewhat unrecognizable shaven headed Vince Vaughan pitched up in this mid budget prison drama last year and put in an entertaining performance as the unbalanced ex con. Vince Vaughan is acting once again. This is a surprisingly enjoyable movie. No more dreadful romcoms please mate!

It’s from Greg Zahler, the writer of the gruesome Western ‘Bone Tomahawk’, this one gently themed around Dante s Inferno with more B List gore effects than the above, dare I say the touch of the Grindhouse.

Shaven headed Bradley Thomas (VV) is a sociopath and has anger issues. When let go from his job as a mechanic they resurface.  His pregnant girlfriend Lauren (Jennifer Carpenter) knows how to calm him. But bills have to be paid and so he asks his drug kingpin mate Gil (Marc Blucas) for work. Gil is about to start a new ‘business opportunity’ with a big shot dealer called Eleazar (Dion Mucciacito) and he needs some muscle. Brad is certainly that. 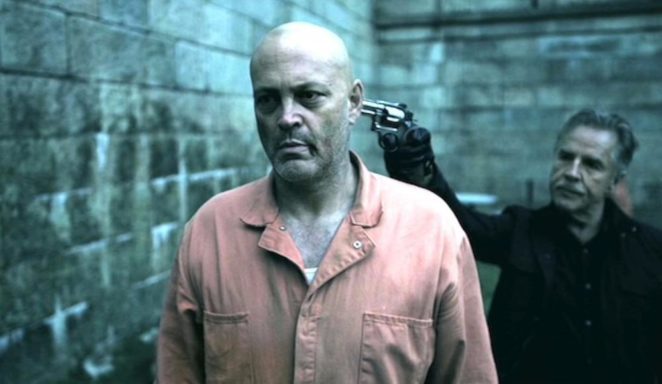 Brad escorts two gringos on a drug pick up, taking a boat out at night to fish the goods out of the water. But back at the dock the cops are waiting and a shootout follows and two dead gringos, no drugs and Bradley in jail.

Eleazar is not happy about the lost drugs and kidnaps Bradley’s girlfriend as leverage against Gil, a man called Mr. Irving (Fred Melamed) showing Bradley evidence of his pregnant girlfriend strapped to a chair somewhere during a prison visit to Bradley. Eleazar is a million bucks light and wants it back. But Bradley can repay the debt another way, getting himself transferred to a high security prison and kill a fellow drug lord (Victor Almanzar), his girl released if he does. But hardass Warden Tuggs (Don Johnson) is ready to dish out retribution if he doesn’t obey by the rules and rehabilitate.

This is good fun and the boys can impress their mates by streaming it to their mates. VV is really good as the monosyllabic nutjob who crushed anyone in his way to protect his girl and future bay, taking a particular liking to crushing heads under his boot. Although that particular special effect is delightfully bad it’s all part of the fun of the film. Vaughan is clearly enjoying going against type and the fact he shaved off all his hair for this role you knew he was going to give it a real go and not let it end up as a straight to video. It’s just refreshing to see an actor take a risk or two.

I think this film will feature in a few peoples top ten’s at the end of the year because it’s an unexpected treat. It’s too violent for kids and not really for girls and so very much a guy’s action movie. It’s actually what blokes like, the same way Taken worked. There is humor hidden in there to and great to see Don Johnson back on screen and hamming it up. Miami Vice made his career but also wrecked his career he was that stereotyped, rather unfair.

Guys, check this out, girls to as Vaughan is sexy with no hair.