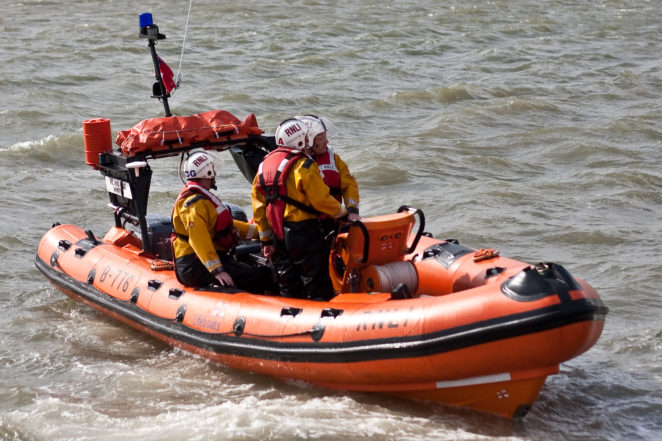 The lifeboat at Leigh-on-Sea.

Steve knew all about trust. As a volunteer on the local lifeboat he trusted all his fellow crewmen and he knew that they trusted him. When the call came they all had to work as a team and lives were saved because they could rely on each other to put their training into practice and do exactly the right things. Lives depended on that trust – not only those of the people they rescued but their own.

That had been very apparent one day last year when a fishing trip had gone disastrously wrong for a local family. Their boat’s engine had failed and a squall had blown in from the southwest, taking the boat far too close to the rocks for comfort. The call for rescue had been responded to promptly, but as the inshore lifeboat approached the scene a particularly large wave carried the fishing boat on to the rocks and the three family members were thrown out.

Steve could see that two of the fishermen – a father and his elder son – had been thrown on to a higher level and were able to scramble to a position where they out of danger from further waves.

However, this was not the case with the younger son, aged about 12, who had landed awkwardly on a lower rock and was not moving. Not only that, but the rock in question was being washed by the sea and the next large wave could easily have taken him back into the water. This boy was clearly the first priority for the rescuers.

Steve’s task was to get on to the rocks and lift the boy to safety, but in order to do that he needed one of his colleagues to steer the inflatable lifeboat as close to the rocks as possible so that Steve could jump ashore. This required seamanship of the highest order so that nobody’s life was put at unnecessary risk.

When Steve reached the casualty he had a shock, because he recognized the boy as being Craig, a member of the Scout troop that Steve ran in the village. Of course, a lifeboatman acts in the same way whether he knows the people he rescues or not, but it must add an extra emotional tug when it is somebody that is personally known to him.

All three members of the family were taken to safety, but Craig’s injuries turned out to be serious and it eventually became clear that he might never walk again. From now on he would have to rely on a wheelchair.

However, that did not stop Craig from continuing to be a member of the Scout troop. Steve was delighted to see him turn up at the Scout hall as soon as he could after leaving hospital, and Craig continued to be a popular and valued member of the troop.

One aspect of the trust placed in lifeboatmen is that they will always respond to a “shout” as soon as it comes. When the pager sounds it is essential that they drop everything and get to the lifeboat station as soon as possible. Steve’s experience with Craig’s rescue had made that abundantly clear. Only seconds after he had been taken off the rocks another massive wave had come in that would have swept both him and Steve into the sea.

Steve was therefore never without his pager when he was on call, and the members of his Scout troop knew that. Fortunately, it had never happened that a call had come during a Scout meeting, but there was a first time for everything. If the pager went off, Steve would have to go, no questions asked.

One evening, about a year after Craig’s rescue, Steve decided to give his Scouts a demonstration of what trust involved. They would play the “fall over backwards” game that has been played many times in various contexts. One person stands immediately behind another and, at a given signal, the front person falls backwards to be caught by the back person before he or she hits the floor.

It is nothing more than an illustration of what trust means, because it would be unthinkable for the back person to stand aside and break the trust. The ramifications could be quite serious! Even so, it is a game that makes the point quite well.

On this occasion, Steve had a small problem in that, although he had an even number of Scouts in the room, one of them was Craig in his wheelchair. He decided to give Craig the job of blowing the whistle while he made up the numbers by being one of the catchers.

The scouts arranged themselves in a semi-circle, divided between fallers and catchers, the idea being that they would swop over and change roles the second time round. Craig sat in the middle, armed with the whistle. Everyone waited for his signal.

Two things then happened at exactly the same time. From the far side of the room, in the pocket of Steve’s jacket hanging on a hook on the wall, came the unmistakable sound of his emergency callout pager to which an instant response was essential.

The second thing was that Craig blew the whistle.