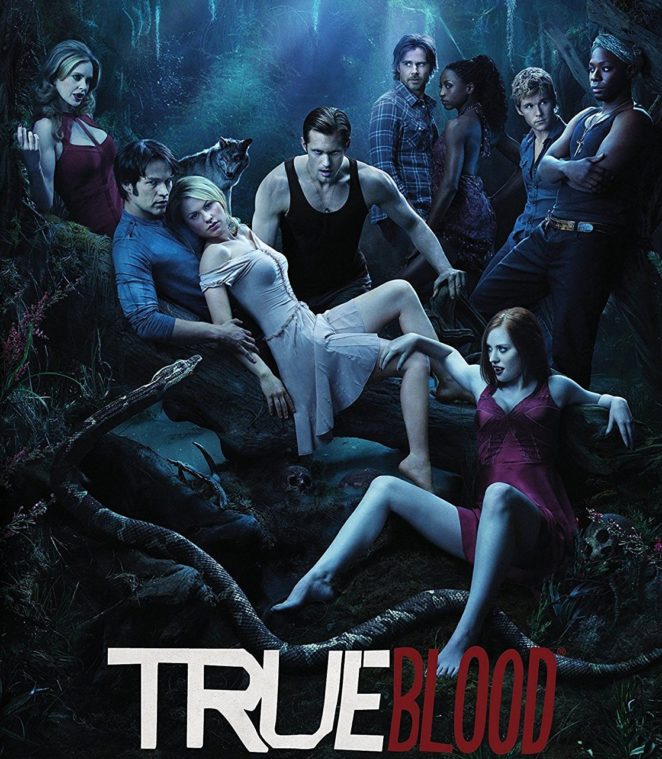 True Blood is an American 2008 TV series categorized as dark fantasy horror, produced and created by Alan Ball, that is based from Charlaine Harris, an American New York Times bestselling author’s series of novels’ entitled The Southern Vampire Mysteries. Charlaine Harris has been writing mysteries for thirty years, also wrote Midnight Texas, on which a TV series of the same title has been based to be watched on TV screen as one of the recent TV series broadcasted on NBC (National Broadcasting Company).

The show was broadcast in United States on HBO, a premium cable network, and was produced by HBO in association with Ball’s production company, Your Face Goes Here Entertainment. The series premiered on September 7, 2008 and concluded on August 24, 2014. The series runs in 7 seasons with 80 episodes all in all. It runs for an approximate 6 years in the television, from 2008-2014. Its first five seasons received highly positive reviews, and won awards and nominations, including Golden Globe and an Emmy.

The series depicts the story around a telepathic waitress named Sookie Stackhouse, living in the rural town of Louisiana, which is in Bon Temps, two years after the synthetic blood’s invention has allowed vamps to come out of their coffins and allow their presence to be known to mankind. She is played by a Canadian actress Anna Paquin, who is famous for her role as a mutant in former X-Men movie trilogy. She, too, won in this series  “True Blood” as Golden Globe’s best performance by an Actress in a Television Series on year 2009. She also starred as Rachel in Scream 4 (2011), Flora of The Piano (1993), Queen Isabella of Amistad (1997), Robyn Lee of Buffalo Soldiers (2001), and other recent TV series like Bellevue, Alias Grace, as guest roles. As a matter of fact, she is the first millennial to have received an Academy Award nomination for acting, and the first to win.

Also in this series was Stephen Moyer, an English actor, who starred as a 173-year old vampire Bill Compton, whom Sookie fell in love with. Bill Compton, for the first time must navigate the trials, terrors of intimacy and relationships, and even tribulations. Stephen Moyer recently cast as Reed Strucker, a prosecutor and a father of two mutants in a Fox TV series based on Marvel’s X-Men comic books. The TV series is The Gifted, which ran its first episode last October 2, 2017. Stephen Moyer also cast as Milus Corbett in a 2015 TV series The Bastard Executioner,John Fogleman in Devil’s Knot (2013), Owen Pace of Priest (2011), Marcus Ford of The Hatton Garden Job (2017), Vincent of Detour (2016), and as Lieutenant Breeland of Shots Fired, a 2017 TV series.

Other actors who cast in this series were:

(1) American actor Sam Trammel, who played as a shapeshifter named Sam Merlotte, who owns his bar at his local town in Bon Temps, Louisiana, which is called Merlotte’s Bar and Grill. He also played as Gerry Conway of Imperium (2016), Michael of The Fault in Our Stars (2014), and Tim of Alien vs. Predator: Requiem (2007);

(2) Australian actor Ryan Kwanten (John of Blunt Force Trauma, Jan “Cat” Boellard of Kidnapping Mr. Heineken, Conall of Northmen – A Viking Saga, Kludd of Legend of the Guardians), played as Jason Stackhouse, a brother of Sookie, who was always a tough-talking and a womanizer;

(4) American actor Nelsan Ellis, played the role Lafayette Reynolds, a gay short order cook, drug dealer, road crew member, and medium. After a relationship with the powerful brujo Jesus Velasquez, Lafayette has become possessed by a Mexican demon, giving him even more power. Nelsan Ellis also played as Shinwell Johnson of Elementary, Tyrik of True to the Game, Mack Burns of Little Boxes, Jesse Fletcher of The Stanford Prison Experiment, Dionysus of Gods Behaving Badly, Henry the Waiter of The Help, and David Carter of The Soloist;

(5) American actress Carrie Preston, played the role Arlene Fowler,  a sassy Southern woman who sees herself as spunky; she says what she wants, sometimes disregarding others’ feelings. She also played as Polly of Claws, Aunt Margaret of Daisy Winters, Susan of To The Bone, Elsbeth Tascioni of The Good Wife, Idalyn Greaves of The Legend of Bagger Vance, Barbara of The Stepford Wives, Sydney of Transamerica, Madeline Dunn of Sex and the City, and Amanda Newhouse of My Bestfriend’s Wedding;

(6) American actress Rutina Wesley, played the role of Tara Thornton, a bestfriend of Sookie, who later became a vampire.  Tara is the smartest person in Bon Temps, Louisiana, but her cynical nature, born of her abusive background, has made her extremely blunt and often confrontational with others. Tara grew up in a very abusive home with an alcoholic mother, and consequently finds it difficult to fit in with normal society or to trust people. Rutina Wesley also cast as Liza Warner of Arrow, Reba McLane of Hannibal, Shelby of 13 Sins, Nova Bordelon of Queen Sugar;

(7) Swedish actor Primetime Emmy award winner Alecander Skarsgard, played the role of Eric Northman, a Viking vampire who is shown to be calculating yet loyal and generally willing to absolve humans that aggravate him, unless they have grievously crossed him. His loyalty as Progeny to his Maker Godric was so strong, that he fell to his knees in tears when Godric decided to end his life by meeting the sun. He also starred as John Clayton or Tarzan himself in The Legend of Tarzan, Adam and Meekus of Zoolander 1-2, Terry Monroe of war on Everyone, Commander Stone Hopper of Battleship, Geert of Kill Your Darlings, and as the boyfriend of Lady Gaga’s music video Paparazzi;

(8) American actress Deborah Ann Woll, played the role of Jessica Hamby,  a human turned into vampire and a progeny of Bill Compton. She also cast as Karen Page in Daredevil and Marvel’s The Defenders.

This series depicts the fictional universe on the notion that vamps exist, unbeknownst to the race of humans until two years before the series premiere, when the “Tru Blood”, a synthetic blood, was created by Japanese scientists, which eliminated vampires’ need for survival of human blood, allowed them to coume out of their coffins and reveal their existence to the world. The so-called Green Revelation has split vampires into two factions: those who wish to interact into human society by campaigning for citizenship and equal rights, and those who think humans and vampires can never exist as one, because it conflicts with the inherently predatory and violent nature of vamps. It has also caused similar divisions amongst non-vampires. Some believe  that they should be accepted and granted rights, while others treat them as monsters needed to be destroyed and annihilated. Throughout the series, other supernatural creatures were also introduced, among them are the shapeshifters, werewolves, faeries, witches, and maenad.