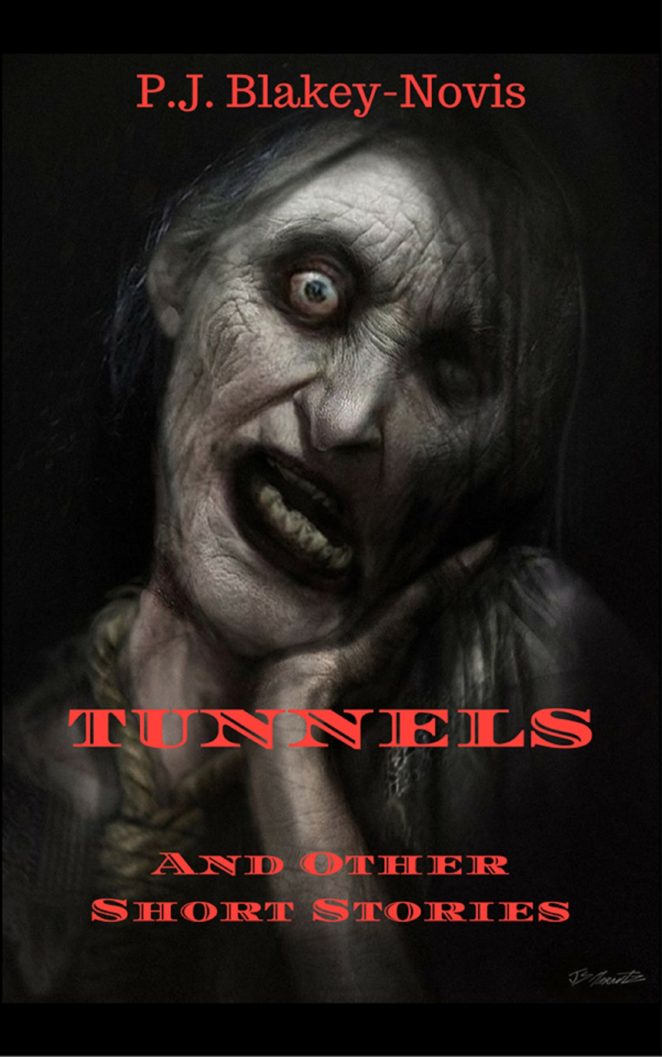 Here is an excerpt from Trick or Treat, one of the short stories included in the Tunnels Collection. Enjoy!

“No-one home,” I declared with relief, turning to leave. Chloe knocked again. This time we heard footsteps, accompanied by a kind of dragging sound; the first image to come to mind was a heavy-set person dragging a body. We all took astep back and waited, suddenly hopeful that some money would be pushed through the letterbox after all. However, it wasn’t; the only sound was that of numerous locks being undone. I wanted to leave at this point, but I was also frightened to run away after we had disturbed whoever lived there.

When the last locked clicked, there was a pause. I wondered if the resident was elderly and had changed their mind about opening the door. Then, with a creak, it began to swing open.

“Trick or treat,” Chloe announced, trying to sound friendly. There was no-one there, just a dark hallway barely illuminated by a string of fairy lights of eitherside. “Hello?” she called into the house.

“Probably a good time to leave,” I said, no longer caring if my friends thought I was a wimp. There was no-one there, and walking in would be trespassing.

“Hello?” Chloe called again, this time placing one foot across the threshold.

“You can come in!” came a voice, startling us all. It sounded as though it belonged to an old woman.

“Sorry if we disturbed you,” I called in response, whispering to the others once again that we should leave.

“It’s no bother,” the voice replied. “I’ve got some Halloween treats here, if that is what you were after? Just in the hallway, help yourself. Sorry I can’t bring them out; I’m a bit frail these days.”

“Seriously?” Tommy said, a little more loudly than he had intended. “She could make it to the door to open it, so why didn’t she bring the treats then?” He had a point. The temptation of money, or even some other decent reward got the better of us and each holding on to one another, we crept into the hallway.

“Leave the door open,” I told Tommy, who looked at me as if to say that was the most obvious thing in the world.

“I’ve set up a Halloween game in the hallway if you want to play?” asked the voice.”Do a trick, get a treat. I hope you enjoy it.” It was creepy, and I was beyond having second thoughts. I decided that we should see the Monroe woman, at least show our faces, so I walked into the dark room that the voice came from.

“Hello?” No reply. I fumbled for a light switch. It didn’t work.

“The power must be off,” Tommy suggested.

“The fairy lights are working,” I said, pointing to the plug sockets that they were attached to.

“Bulb must have gone, then,” he said.

“Hello?” I called again, moving further into the room. Nothing. My eyes adjusted to the dark a little and there was no doubt that the room was empty. I felt colder. Something was wrong. “I’m going,” I told them, turning back towards the door. Before anyone could answer me, the door slammed shut, the bolts’ locking of their own accord. Chloe screamed. Phoebe began to cry.

‘Tunnels and other short stories’ is available now from Amazon.