Hollywood in Los Angeles, California could be called a Land of Fantasy and one of its most famous symbols is the Hollywood Sign. It sits on top of Mount Lee in Griffith Park and towers over Hollywood. The original sign was built in 1923 and was done as a publicity ploy to encourage people to purchase homes in the subdivision known as Hollywoodland located along Beachwood Canyon. One of the promoters for the sign was Mack Sennet, however, the sign wasn’t meant to last forever, only for a year and a half. The Hollywood Sign cost $21,000 to build and each of the letters was 30 ft. wide and 50 ft. high. Studded with light bulbs the sign could be seen for miles around. However there was the constant problem of maintenance and vandalism and finally, maintenance of the sign was discontinued in 1939. Late in 1944 the H. Sherman Company became the owner of around 435 acres of land adjoining Griffith Park including the sign. They took down the word land and now the sign simply read Hollywood. In August of 1978, the sign got all-new steel letters and stretches 450 feet along the side of Mount Lee and remains a symbol of Hollywood.

The Start of an Acting Career

Peg Entwistle was born in London, England in 1908 in an acting family. After her mother died, her father was left to raise her and two brothers, Robert and Milton. The family moved to New York where Peg’s father started working in a local theater. Tragically her father got run over and her brothers were sent to Loa Angeles, California to live with their uncle Harold Entwhistle. At the age of 17, Peg stayed behind to find work in the theater. She made her debut in Hamlet and became a Broadway star joining the New York Theater Guild.

During the time Peg worked on Broadway she met and married a fellow actor Robert Keith, ten years her senior. She discovered late on that her husband has a son from a previous marriage who incidentally turned out to later be Brian Keith – actor of the TV show “Family Affair”. Their marriage ended in divorce and Peg fell upon bad times on Broadway when the Great Depression arrived and people could no longer afford to go to the theater. However, Hollywood was still in full bloom and starting to make the transition from silent films to the talkies. Since a lot of the silent screen actresses were failing to make the transition due to their voices Peg packed her bags and headed for Hollywood hoping to become a star.

A New Hopeful Arrives in Hollywood

When Peg got to the West Coast she moved into a Beachwood Canyon bungalow with Uncle Harold and her brothers.  The spookiest thing was that the house was located right under the sign which in those days spelled out – Hollywoodland. The first job she got was in a small theater in a play called “Mad Hopes” starring Billie Burke, who later became Glenda the good witch in “The Wizard of Oz”. In this show was another newcomer – Humphrey Bogart. Unfortunately, the play was not successful and Peg went on to perform in some small productions along with Billie Burke while Bogart returned to New York. Finally, she landed a short-term contract with RKO Studios. Her first role was in a film called “Thirteen Women” but in the eyes of the critics, the film was a disaster. 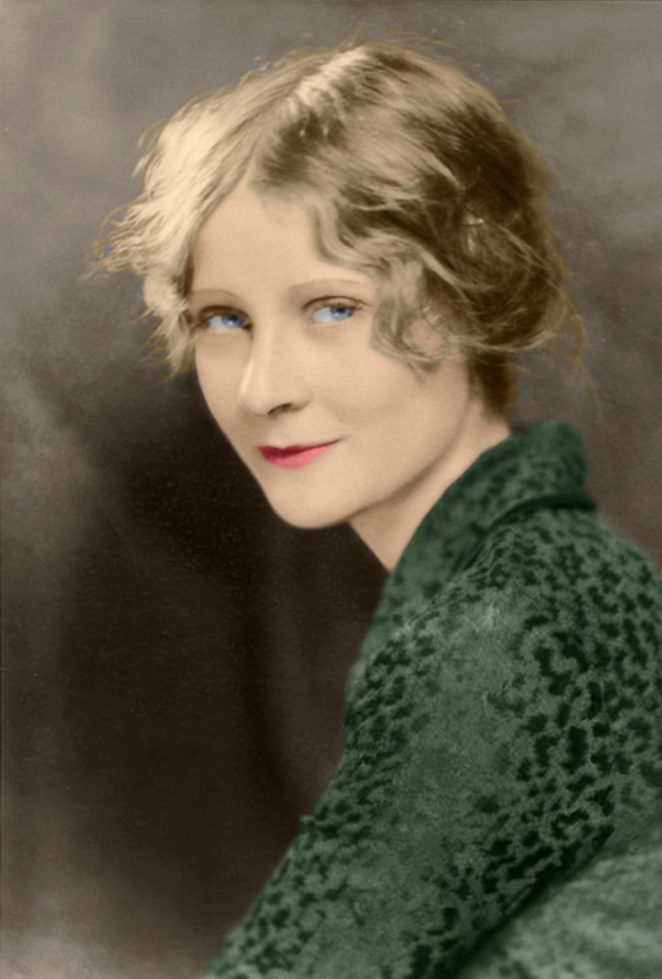 When the Hollywood Sign Became a Symbol of Death

After being dropped from RKO Studios Peg became just another pretty face in Hollywood. Perhaps she could have returned to the lights of Broadway but she had not fare back to New York. Waiting around and feeling so low Peg did what many had done before her. It all happened on a night in September 1932. The last time anyone had seen Peg alive she was seen heading down Beachwood Canyon toward Mount Lee. When she got to the Hollywood sign she took off her coat, folded it up neatly and placed her purse at the bottom of the maintenance ladder that leads up to the letter “H”. Peg had decided that Hollywood was done with her and never would the bright lights shine upon her again. So she headed on up to the top of that letter and like a bird in flight went soaring into the air only moments later to come crashing into the ground. She was lucky the fall killed her and didn’t make her a cripple. She became just another Hollywood failure cutting her life short at the age of 24. The next day a woman hiker in Griffith Park saw Peg’s purse and coat by the ladder. Upon opening the purse she saw the suicide note. It simply said that she was a coward and was sorry for everything and that if she had done this a long time ago it would have saved everyone a lot of pain. The woman replaced the note in the purse and then took the coat and purse and put them on the steps of the Hollywood Police Station. It was two days later that the authorities found Peg’s body in the brush at the bottom of Mount Lee. Not being sure of her identity the police placed a description of the woman in the newspaper along with a copy of the suicide note. Uncle Harold, who had been searching for Peg contacted the police and identified his niece’s body. The saddest and most ironic thing is that Uncle Harold had found a letter mailed to Peg just the day before she jumped. The letter was from the Beverly Hills Playhouse offering her the lead role in their next production. What is so spooky about this is that the role was about at a lovely young woman who commits suicide in the final act. So it leaves one to think if the hand of fate could have been stopped and instead of becoming a suicide she could have played one and gone on to greater heights of success.

Peg’s death, however, was not to be her so-called swan song. In the years following her suicide hikers and park rangers in Griffith Park started reporting sightings of a woman dressed in 1930s era clothing. When they approached she would vanish. The entity was described as an attractive blond woman who looked so very sad. It is thought that this was the ghost of Peg Entwistle. When the ghost appeared there was also the pungent scent of gardenia perfume which had been her trademark perfume. In 1990 a North Hollywood man and his girlfriend were walking on Beachwood Canyon trail near the Hollywood sign when their dog started behaving strangely. At first, they couldn’t tell what was wrong and then they saw a lady walking nearby. She was dressed in the style of the 1930s but since this was Hollywood they didn’t pay much attention to that fact. However, the lady appeared to be in a daze and the couple thought that she might be on drugs or drunk and steered clear of her. Then suddenly she just faded away. The couple had no idea about Peg and when they found her story they were very surprised because it was the lady they had seen.

It’s so sad to think that the Hollywood sign exists as a symbol of hope but for Peg Enwhistle it appeared to be a sign of despair. Others made it to fame and fortune she could not. If only she had found that letter from the Beverly Hills Playhouse before her last desperate act….. If only… but that’s life and it isn’t always fair. However, she did find fame in death and so she continues to play her role around and about the Hollywood sign.