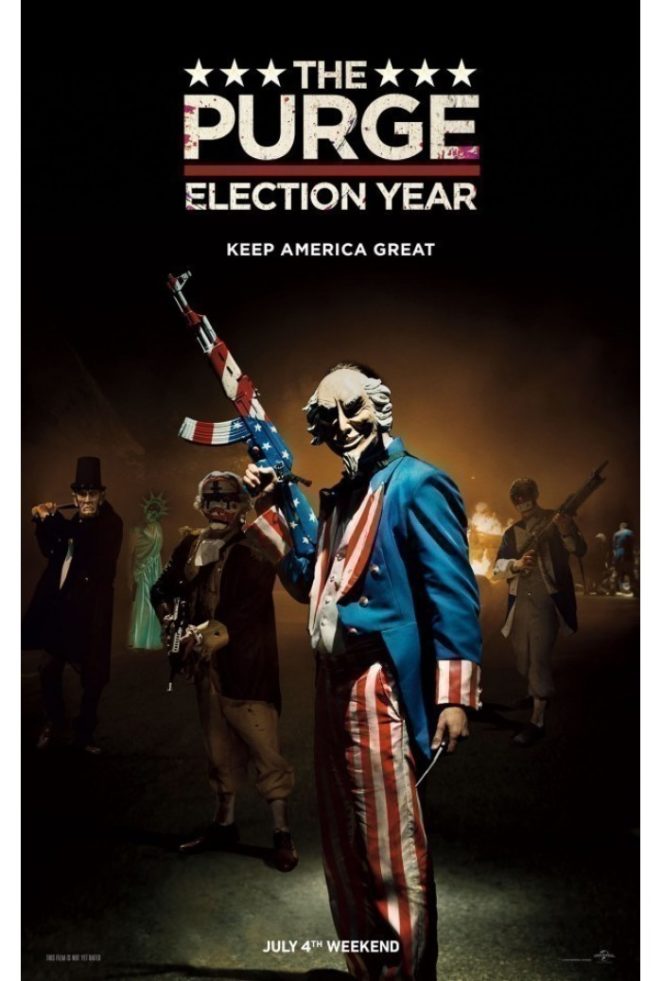 The biggest worry about the Purge movies is if Donald J Trump gets to watch them, a policy he would quite like to try and get through Congress to sort all those Mexicans and immigrants. The basic concept of the movie is there is one night a year – in an alternative version of America – where the law is suspended and anyone can kill anyone who takes part in The Purge, all emergency services suspended, strictly voluntary participation unless you are poor or homeless and live on the streets, the main targets to be killed by the Purger’s. Everyone else drops their shutters, puts an extra lock on the door and hides away for the long night, not always enough as the body count soars. Vengeful nannies kill their employers; workers kill their bosses and all manner of marauding killers with all manner of gruesome marauding ideas do terrible things.

The four films so far….

•           Kyle Secor…Minister Edwidge Owens, a pastor of a NFFA-affiliated cathedral

Senator Roan (Elizabeth Mitchell) is running for the U.S. Presidency, promising to end the annual purge nights, her family a brutal victim to it 18-years ago. Former police sergeant Leo Barnes (Frank Grillo) is her head of security

The New Founding Fathers of America (NFFA) are the current party running America and their candidate for President, Minister Edwidge Owens (Kyle Secor) is hoping to take over from incumbent NFTA President Caleb Warrens (Raymond J. Barry). Both view Roan as a threat and so under the pretense of regaining public trust, they revoke immunity for everyone, including government officials, on Purge night. Roan is now a target like anyone else, if she doesn’t stay home.

Watching the presidential debate on TV as purge night approaches are deli owner Joe Dixon (Mykelti Williamson), his Mexican immigrant assistant Marcos (Joseph Julian Soria), and former purger turned emergency worker Laney Rucker (Betty Gabriel). The day hasn’t started well with a pair of teenage girls trying to shoplift them, only backing down when they encounter Laney, recognizing her as a famous ex-Purger and so respect due. They leave peacefully but will be back when the sun goes down and purge night arrives, meaning the boys will have to protect their store all night now as Joe receives a phone call stating the cost of his purge insurance has been raised beyond affordability. There are also new rules to the Purge this year, “Murder tourism” as foreigners can fly into America and join the annual Purge night.

As the purge begins, Laney and her partner patrol the city in an ambulance, providing medical care to the wounded, protected under a purge amnesty. Senator Roan decides to wait out the Purge from her home to secure more public support, and so votes, rather than bunker down in a government secure location, and is accompanied by Barnes security team who locks down her house. However, there are traitors on the detail, who allow a neo-Nazi paramilitary force led by Earl Danzinger (Terry Serpico) to invade the house. Barnes escapes with Roan to safety with a bullet wound for his trouble. They now have to navigating the hostile streets of Washington D.C. on Purge night to get her to safety and to Election Day, hoping she has enough axe wielding voters out there on her side.

The Purge movies are like the Final Destination ones in that you know exactly what you are going to get and a simple horror formula of blood and guts, revenge and dark humor will deliver so no need to engage the brain. For that reason alone I have stuck with this franchise and no surprise if you get that horror/action formula right you make good money from a modest outlay. So profitable was the original Purge trilogy they rebooted it with a fourth film and have made more money than the preceding film every installment. Film 5 is in production.

It’s not the best of the three I have seen but good fun. There are no real surprises in the plot and the hero’s predictable. A slight racial tension and a political side plot don’t add much as Frank Grillo cracks some skulls and saves the day. The senator’s house is the same house as Frank Underwood’s in House of Cards, by the way, a not very interesting point but will help to bulk up this review.

It’s not too bloody this time and although moments of extreme violence (so not for kids) it’s done in a two-dimensional kitsch way keeping the action moving. If it was a TV show it would be just another episode to keep you coming back for more. That $10 million bucks is well spent as it looks good onscreen and Grillo a cool brooding ‘man with a past’ hero. If you want a popcorn trilogy not on the must see action radar so much but solid then this is for you.