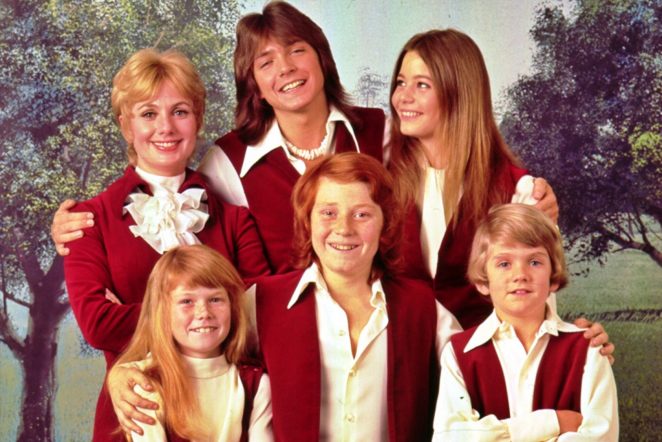 On September 25, 1970, a TV show premiered which brought lots of teenage girls, including me a teen idol named David Cassidy. The show was The Partridge Family and it became a smash hit. The inspiration for the show came from a real-life singing family act The Cowsills with four teenage brothers who later added their mom and two younger siblings to the act.  The mom on The Partridge Family was portrayed by Shirley Jones and the character was a widow with five children named Keith, Laurie, Danny, Chris and Tracy Partridge. Among them, the only one who could sing was teen idol David Cassidy portraying the eldest sibling Keith.

When the pilot episode of The Partridge Family aired it showed the five siblings trying to talk their mom into joining their recording sessions in the garage. The very first song they sang was “I Think I Love You” and it fast became a number one pop hit. The show and the songs fast became popular and skyrocketed David Cassidy to teen idol stardom. It also picked the pockets of many moms like mine who indulged me whenever a new Partridge Family album came out. However, The Partridge Family never became a real live band that actually went on tour.

https://youtu.be/MU7psHBVyQEThe only cast members who actually sang on all of the Partridge Family albums were Shirley Jones and David Cassidy. Among The Partridge Family hits were songs like “Doesn’t Somebody Want to Be Wanted”, “I’ll Meet You Halfway”, “I Woke Up in Love This Morning” and “Breaking Up Is Hard to Do”.

The Partridge Family became known as an American pop-rock group and released eight studio albums including one-holiday release along with five compilations and eleven singles. David Cassidy died on November 21, 2017, Shirley Jones, who played the mom is 87 years old, Susan Dey, who portrayed Laurie is 68, Danny Bonaduce, who portrayed Danny is 61 years old, Suzanne Crough, who portrayed Tracy died on April 27, 2015, and Brian Forster, who portrayed Chris is 61. Dave Madden, who portrayed their manager Reuiben Kincaid died on January 16, 2014,