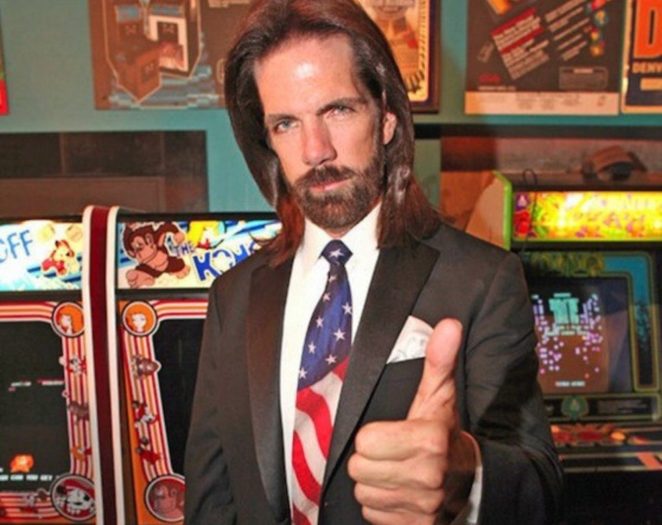 Mr. Awesome: [on video, as George C. Scott in “Patton”] I want you to remember that no punk bastard ever got a gnarly piece of poontang by being sensitive and considerate!

That quote, believe it or not, is from a documentary about the world of classic arcade video gaming, specifically about the event organizers, the players and their record chasing exploits, not the type of crowd you would associate with getting women. It’s all very different today with stuff like the X Games and the multimillion dollar deals and prizes with modern games competition in places like Asia and those guys and girls do get the trinkets but back then it was coin up action only. This Spinal Tap-esque film follows the not so cool guys and their exploits in that world as they try to set world records on the slot arcade games from the 1970s and 1980s, stuff like Scramble, Galaxians and Missile Command, and Donkey Kong, the star of this film, the original platform game, concentrating on the rivalry on that game between two players, Steve Weibe and Billy Mitchell.

The project by director Seth Gordon began as a documentary about competitive gaming in general but it wasn’t until the film was well into production that Gordon discovered the events surrounding Wiebe and Mitchell, and decided to re-focus the film entirely on their Donkey Kong rivalry. If the director had decided to make this film just three years later it would have been even more entertaining as there were big developments in the story around the two main protagonists last year. But I won’t spoil it for you as you guys should enjoy this often hilarious film first, and that’s 100% free on YouTube.

We meet the characters and players in this particular geeky world and pick up the story of the bearded, mullet wearing Billy Mitchell, the rock star of the classic gaming world, who thinks he is Nick Cave and has an ego bigger than Donald Trump’s. In 2005 at the time of this film being made he had held the Donkey Kong world record of around 870,000 points. But there is a new kid on the block, likeable family man Steve Weibe, who, like most top gamers, has the original coin op arcade game at his home and plays it a lot, also an 800,000-900,000 point player. With two young kids and a loving wife they have to compete with the mighty Kong for the Mid-West school teacher’s attentions – or unplug his machine.

Billy has grown a certain amount of fame over the years from his Kong skills and loves the celebrity and notoriety. But he rarely plays the game live for people to judge his records and tends to tape his games and send them in, which is allowed in the gaming world, if all conditions are met. That world is run by the organization ‘Twin Galaxies’, headed by Robert Mruczek and refereed by Walter Day, set it up to run the classic gaming competitions and verify world records.

Robert Mruczek: When I have to watch that pile of eight tapes over there for Dwayne Richards’ two-day Nibbler performance, that’s 48 straight hours of paying attention and making sure he’s doing everything correctly.

It’s fair to say Twin Galaxies are big fans of Billy Mitchell and have yet to accuse him of cheating. Indeed they send out spies to see if people who claim to have beaten his records are the cheats. But Steve Weibe is a man who fronts up and prepared to break the record live where and when he is required and on their machines of choice, a threat to Billy’s bubble. Weibe is not happy that his integrity is questioned, especially when two guys turn up at his house asking to inspect his Donkey Kong machine. This stacks pressure on Billy to show up but he intends to hijack Wiebe’s record attempt by sending in another tape to the chosen arcade where gamers meet once a year for world record attempts on all the different arcade games of the era, from Tron to Space Invaders, to Centipede to Donkey Kong, of course. 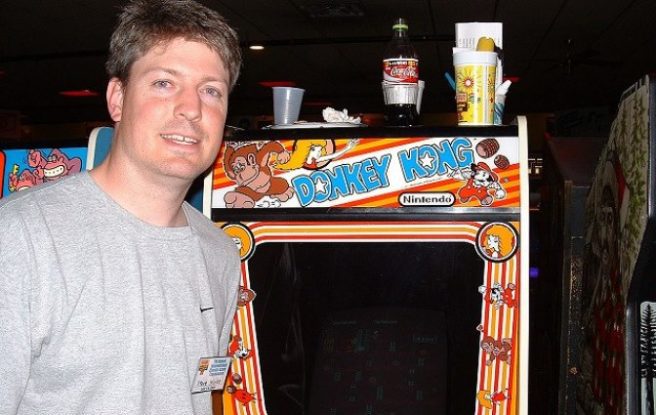 Billy doesn’t show on day one of the contest to front up and sends in a tape on day two, which the crowd watches instead of Steve’s live attempt. They love Billy. Steve duly delivers a huge score as organizers gently intimidate him to fail whilst the tape seems to show Billy break the million. But Steve hits back goes all the way to the end of the game, the ‘kill screen’, when there is no more memory in the machine to keep going, 987, 000 points. He has proved his skills to those who matter and now the Guinness book of Records are interested, looking to add video game records to their fabled catalogue. Would this be enough to temp Billy out from the shadows to take on Steve Weibe and set the new and official world record or will he continue with his tapes to hang on to is fading celebrity?

Several of those depicted in the documentary, including Wiebe and Mitchell, claim that it does not accurately depict events. For example, Wiebe and Mitchell were, and still are, on friendlier terms than is suggested, and another player’s record, Tim Sczerby, was in place during some of the events but is omitted from the film through the clumsy edit. The director has admitted some artistic license and arguing that his account is more entertaining this way. It’s hard to argue. Wiebe would later challenged for the Donkey Kong record on live television in 2009, aired on G4TV. It was the first and only time to date that an arcade world record attempt took place on live television. Mitchell was also invited to play, but declined to do so. This was not included in the film as a year after release.

It’s a good fun 80 minutes and some belly laughs to be had from the sad but likable guys. It’s a film really about the male ego and the quest for some sort of fame and so recognition in life for those desperate for that self esteem boost.