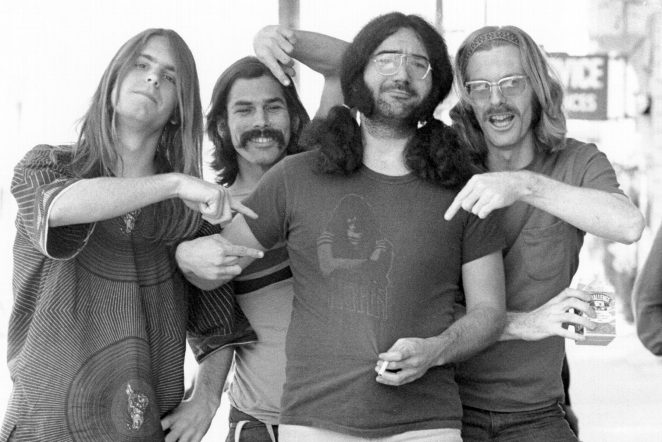 An American band with a most unusual name is The Grateful Dead formed in 1965 in California. They were known for their mixture of folk, bluegrass, rock, blues, reggae, country, rock and space rock. They would perform giving long musical improvisations. In 1994 they were inducted into the Rock and Roll Hall of Fame.

The Grateful Dead gave one of their earliest performances in 1967 which was a musical event named Mantra-Rock Dance held at the Avalon Ballroom in San Francisco, California. In the 70s they performed in New Orleans, Louisiana and went on a European tour in 1972. However, one of their band members Pigpen was in deteriorating health and gave his last performance with the band in June of 1972 at the Hollywood Bowl in Los Angeles, California and died of alcohol abuse in 1973. The band continued to perform with new members. They released a successful album titled Wake of the Flood and another album the following year Grateful Dead from the Mars Hotel. They resumed touring in 1976. Their best selling studio album was released in 1987 called In the Dark and that same year they toured with Bob Dylan which sparked another album titled Dylan and the Dead.

They appeared in both the Monterey Pop Festival in 1967 and the Woodstock Festival in 1969. Among their best songs were “Scarlet Begonias”, “Bertha”, “Sugar Magnolia”, “Fire on the Mountain”, “Ripple”, “Uncle John’s Band”, “Friend of the Devil”, “Touch of Grey”, “Truckin’”, and “Casey Jones”.

https://youtu.be/AWuQiGaIssoThey chose to disband in 1995 and in 1998 band members Bob Weir, Phil Lesh, and Mickey Hart with other musicians put together a band called The Other Ones. In 2003 they chose to change their name to The Dead and toured around the country in 2003 and 2004. In 2008 the Dead performed in two concerts one called Deadheads for Obama and the other Change Rocks. Other members of the original Grateful Dead have also pursued solo musical careers.