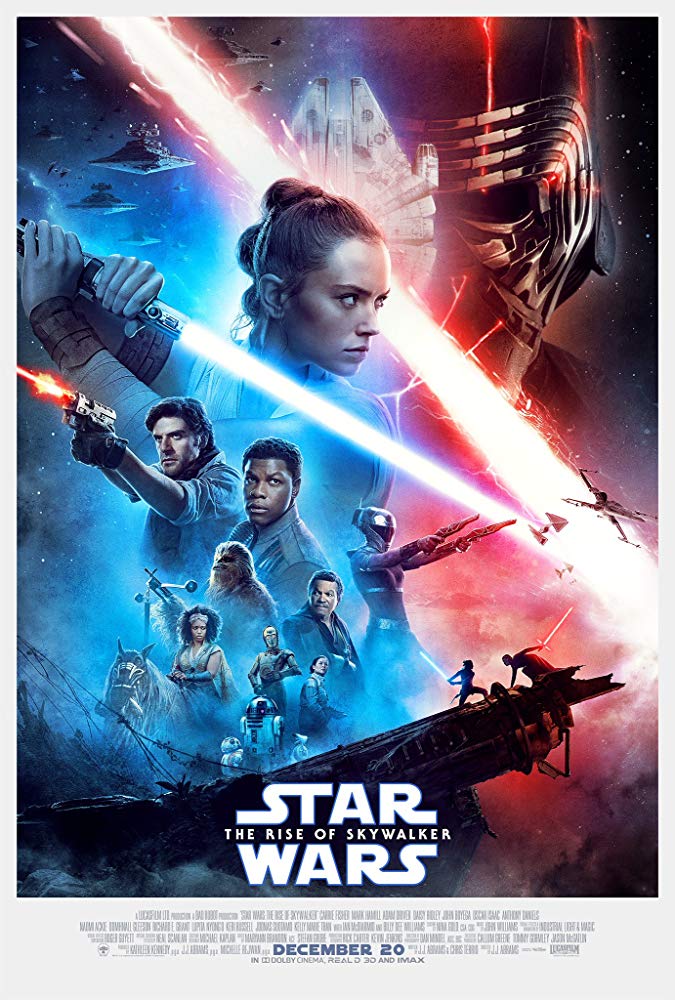 So is this the final Star Wars film? Lucas film wrote nine in the saga and says there are no more but Disney paid billions for Star Wars and I’m sure will try and squeeze more out of it, even though it’s done to death now. The nine films have grossed well over $10 billion dollars. The Star Wars magic happened way back in the 1970s though because its special effects were so advanced and spectacular for the time but the rebirth with CGI in the 1990s not really doing the franchise justice. I enjoyed the rather retro reboot recently but The Rise of Skywalker a rather bland way to end the latest quadrilogy.

The money so far-

Emperor Palpatine (Ian McDiarmid) has vowed revenge on Kylo Ren (Adam Driver) so he has sort the help of a Sith wayfinder to land the first blow, leading him to the uncharted planet Exegol. Palpatine confesses that he created the evil Snoke (Andy Sirkis) as a way to control the First Order and tease Kylo to the dark side of The Force.

Palpatine has built up the Final Order, a massive covert fleet of Star Destroyers, ordering Kylo Ren to find and destroy Rey (Daisy Ridey), currently Jedi training under Resistance leader Leia Organa (Carrie Fisher). Finn (John Boyega) and Poe Dameron (Oscar saac) also discover intelligence that Palpatine is on Exegol. Finn, Poe, Rey and Chewy and the droids, BB-8, and C-3PO, race there in the Millennium Falcon to contront. Kylo exploits’ his forced connection to Rey to locate her, traveling to Pasaana with his army.

With the help of Lando Calrissian (Billy Dee Williams), Rey and her team find a clue—a dagger etched with Sith writing, which C-3PO’s programming forbids him from interpreting— the dagger in the wreckage of a Jedi hunter ship , named Ochi. A showdown happens between the two groups.

On a planet called Kijimi, a droidsmith extracts the Sith text from C-3PO’s memory, revealing coordinates to saves Poe, Finn, and Chewbacca from execution but no more C3PO. The group escape on the Falcon to the wayfinder’s coordinates on a moon in the Endor system. Here Rey must face Kylo to decide he fete between the dark and light side of the force.

Like The Avengers it’s time to end this. CGI means pretty much any studio can churn out this space and super hero stuff now so samey. The original Star Wars was part of my childhood but I can’t imagine youngsters of today have been overwhelmed by this stuff. For the alleged final episode it was all rather unspectacular and bland.

Carrie Fisher is reanimated from her latest painkiller addiction to do her final part in the series before her timely death and Mark Hamill also getting more work. Well the film is named after him. Boxes are ticked for the rest of the cast and anew range of aliens to sell in the toy shops.

It doesn’t exactly work in the continuity of the nine films but it has been 42 years in the making. Action is solid and some good battle scenes and, no doubt to construct the video game series on top.  The final film is OK but no more than that.