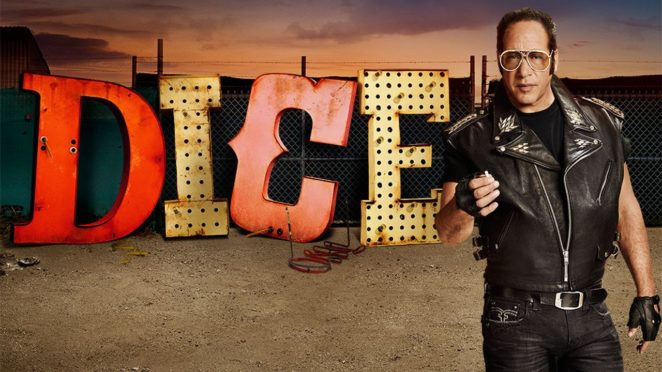 With the Corona Virus lockdown we are increasingly watching TV and now is the time to take the move to streaming services like Netflix to discover some new TV. The players are free or cheap online and you pay around £10 a month PAYG for the services. I am using a month of Amazon Prime and NOWTV right now and plenty of new and old shows to try.

Dice is one of those new shows I have discovered and is named after Andrew Dice Clay, who was a pretty big American standup comic back in the day, apparently. I had not heard of him. It’s a spoof Entourage /Curb Your Enthusiasm style show where the real life Andrew Dice Clay plays an exaggerated version of himself as a washed up Las Vegas celebrity and how he lives that life along side plenty of send up celebrity guest cameos, finding it very hard to let go of his fame and reputation…

Andrew Dice Clay as himself

David Arquette as himself

James Woods as himself

Adrien Brody as himself

Criss Angel as himself

Wayne Newton as himself

Rita Rudner as herself

Michael Rapaport as Bobby the Mooch

Tony Orlando as himself

Mickey Rourke as himself

20-years after his peak, stand-up comic Andrew Dice Clay still lives in a big house in Vegas enjoying the rewards of his long career, selling out the likes of Madison Square Gardens in his prime. For all his bad habits and huge ego his sassy Brooklyn born wife Carmen (Natasha Leggero) adores him and his friends stuck by him, a very trying alpha male.

Work is quiet now and living off his royalties but still popular around town as he bumps into various celebrities and players on the Vegas scene, like Pen and Teller and Wayne Newton etc…not all of them fans. He gets into all manner of comic scrapes protecting his friends and family with “Milkshake” (Kevin Corrigan) his biggest buddy and confident in Dice World. No problem is too big for Dice to fix or, indeed, create. 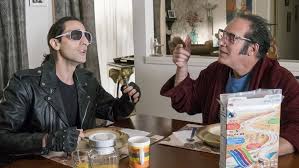 The self parody celebrity in decline comedy is always fun and occasionally clever. I love shows like Curb, Entourage and The Larry Sanders Show when big name celebrities send themselves up. Obviously this show is dumber and more blue-collar on that score than the other ones but still entertaining and laugh out loud now and then as you can’t help but love Dice and his unique moral code.

It was cancelled after two seasons as the second series wasn’t as fun as the first with most ideas used up and so one of those shows that appealed to a smaller demographic. But it’s one to seek out on your new TV packages on these long boring weekends and evenings at home as there is also a lot of rubbish shows on those platforms. If you like Curb and The Larry Sanders Show then worth giving this a spin.