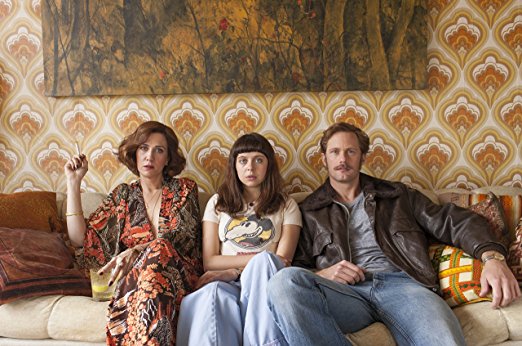 The older you get as a guy the more likely young girls are to check [you] out on the street, if you are still cute, of course. It’s disturbing as it is natural and conflicting. It’s not something to be flattered about or indeed act on. I’m 40 or so and they still do it! Any compliment for a girl in her teens is an integral part of their emotional balance. They need it. This movie dares to go there, emotionally and physically. Not many movies have. No one really wants to talk about teenage girl’s lust for older men. An arbitrary figure of 16-years-old has been set in most civilized countries of the world where it’s against the law for an adult to have sex with someone under that age. That does not account for teenagers emotions under that age though. That will not change. As parent would you really want to read your teenage daughters diary to find out her taboo feelings on sex and life? Based on a graphic novel by the same name, Diary of a Teenage Girl is very brave filmmaking, prepared to go there head first, and so true.

Its 1976 San Francisco and quietly pretty 15-year-old aspiring cartoonist Minnie Goetze (Bel Powley) starts an audio diary on her tape cassette. Her sexual awakening is underway and wants to lose her virginity as she see her looks make her unattractive, even though she receives attention from boys at school.

Minnie’s pot smoking, partying mother Charlotte (Kristen Wiig) is rather bohemian in her attitudes and when she is too busy one night to go out with her 35-year-old boyfriend Monroe (Alexander Skarsgård), she suggests he take Minnie out instead. At a bar, Minnie and Monroe are soon flirting and one thing leads to another, neither conflicted by the age gap. They begin to cheat on mom and meeting at his apartment and having regular sex. Being a maelstrom of emotions and a teenager she shares the details of those sexual experiences with her friend Kimmie (Madeleine Waters), as well as taping them in her bedroom. 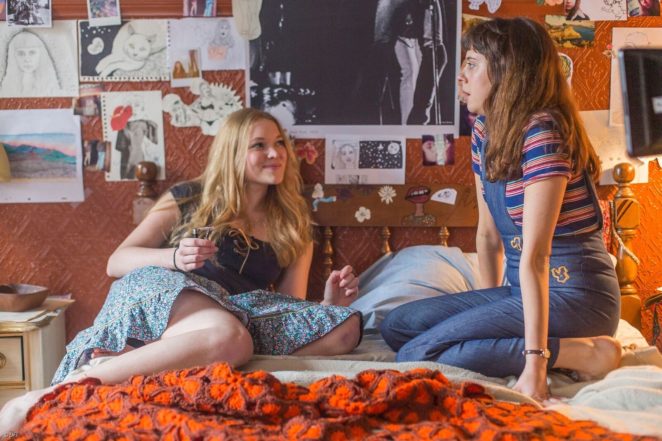 This is a film that will definitely appeal to women of all ages, remembering their confused teenage years but also enjoyed by those living them. I remember as a teenage boy the pressure to date and bed pretty girls as soon as possible to lose that virginity stigma but you never really thought about the teenage girls emotions throughout all that competitive stuff. Hey, maybe they fancied my dad after all and using me to get to them! I wouldn’t say this film has been a revelation on that older man thing but to actually play it out on screen in an intelligent and comic way was refreshing and enlightening to say the least. And there is a nude scene between the two although Bel Powley is 22 in real life.

She is excellent in the lead and having a plainly pretty actress play Minnie adds to the taboo but also realism. All guys know every women is paranoid about their looks and body (especially in the internet and social media years) and any man being attracted to them gives them self confidence, even if the man beds her, as is also the case here. For a guy, a man sleeping with a woman is generally about ego so a far different emotion. I think the film really nails that confliction around what young girls think men want. I would say, though, Alexander Skarsgård’s character Monroe is a bit two dimensional and presented as blameless I the movie for what is an illegal act, even in San Francisco in the 1970s…

It did $2.2 million for its $2 million budget so another mid budget indie that’s pretty much in need of going straight to TV. These films get buried on movie packages and no one is going to buy them on DVD and so dependent on a decent word of mouth cinema release. You don’t see the smaller films advertised on TV anymore and so no way of really knowing about them until they pop up on Film4 etc, where I saw it.

On the whole this is an interesting and groundbreaking little movie and definitely one to watch out for. It’s gently funny in places and poignant in others. It’s not a sexy movie in anyway so it won’t attract those kinds of viewers.

Globe & Mail –‘Seldom has teenage sexual awakening been covered from a female perspective – with a fickle alternating confidence, self-doubt and voracious appetite – quite so frankly or delicately’.

Toronto Star –‘Expect to feel uncomfortable watching Diary of a Teenage Girl, which is precisely the point of this finely etched debut feature by writer/director Marielle Heller’.

Chicago Reader –‘It dares to show the heroine as something more complicated than a victim. As a result the movie lands somewhere outside the battle lines of contemporary gender politics, which may be why it feels true’.

San Francisco –‘It dares to show the heroine as something more complicated than a victim. As a result the movie lands somewhere outside the battle lines of contemporary gender politics, which may be why it feels true’.

Chicago Tribune –‘The film is harsh but wonderful. It shouldn’t be funny, too, but somehow it is, and somehow it’s the right kind of funny’.

The Mail on Sunday –‘The Seventies are scarily well recreated, Powley is both fearless and excellent, and Skarsgård does a fine job of capturing the ambiguities of a character who must attract as much as he repels’.