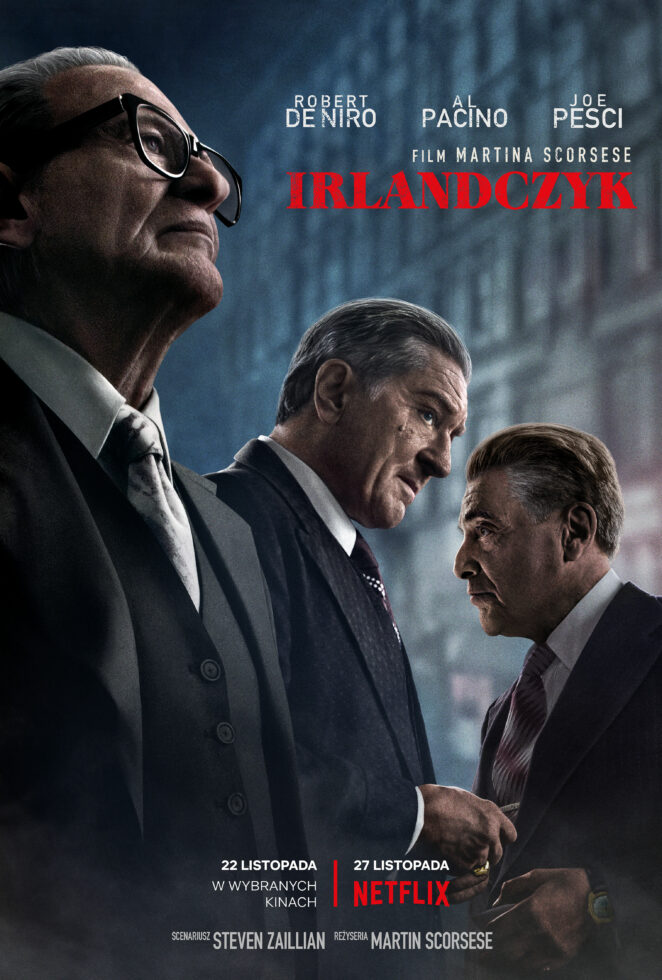 So Martin Scorsese is back in the Italian mob movie business and thank the Lord for that. He hasn’t really done that much of interest since the 1990s, The Aviator and Hugo distracting him away with green screen sprawl. But for The Irishman he has rung around to all his mates from those glorious gangster years and just about everyone from Little Italy is in this including ten actors from Boardwalk Empire. And at 3 hours 27 minutes of movie there is plenty of room for them. Joe Pesci was reportedly asked fifty times by various people to come out of retirement for this before agreeing to do what would be his seventh film with Robert De Niro. It’s also the first time Al Pacino has been in a Scorsese movie.

The star packed Netflix produced movie proved just too long for the award ceremonies and critic’s sore bums and saw it not win any of its 30 major award nominations from the big four award ceremonies, including 10 Oscar nominations and no wins there, the Gangs of New York suffering a similar fete. The Academy are still not cool with Netflix model of film making that tends to avoid a big screen cinema release with this one breaking the big movie 90 day golden rule of not being shown on TV before 90 days in the cinema, this one going out on Netflix after 60 days.

Apart from its notable iconic cast The Irishman uses cutting edge digital enhancement effects to make the stars look really facially old or much younger and it works brilliant. Making De Niro, Pacino and Pesci look younger just races back those memories of Goodfellas and Casino.

It’s set over most of the mid twentieth century around the relationship between then truck driver Frank Sheeran, an Irishman, who falls in with the 1960s East Coast mobsters and then the Teamster Union, befriending none other than Jimmy Hoffa during the Kennedy years. It’s what Scorsese knows best and delivers once again.

Trucker for hire Frank Sheeran (Robert De Niro) decides to try and up his wages and starts to run illegal meat in the Philadelphia area for local mobster Skinny Razor (Bobby Cannavalle) who is part of the crime family run by Angelo Bruno (Harvey Kietel). When Sheeran is accused of theft, a local union man, Bill Bufalino (Ray Romano), gets him off and introduces him to cousin Russell Bufalino (Joe Pesci), who is soon impressed by Sheeran’s versatility as a friendship grows, both men serving in the Second World War and of similar mind, soon doing ‘hits’ for the family.

Soon Russell introduces Frank to Jimmy Hoffa (Al Pacino), the notorious Union boss, who deploys similar methods to organized crime to run his union, Frank soon moving up the ranks of both the family and the union, Frank becoming Hoffa’s bodyguard and close friend as they navigate the turbulent 1960s…

A $200 million budget for a near four hour star packed movie is great value but the box office of just $8 million dollars tell the Netflix story, a big spending operation that doesn’t like the cinema and, as yet, and made any money. The coronavirus pandemic couldn’t have come at a better time for streaming TV and film. But this sprawling passion projection movie would not have got made by a big studio these days and so Marty had to take it to Netflix. For a director who loves the romance of cinema and the big screen that was a surprise. But it’s very familiar Scorsese shoot with those continuous camera shots, quirky dialogue and immaculate period feel here.

It’s just a raw pleasure to watch De Niro and Pacino together and two superb performances. I don’t really know the history or significance of Jimmy Hoffa to America but some gaps filled in here, famous for his mysterious disappearance, of course. As no one really knows what happened to Hoffa this film presents a hypothetical near the end to explain his demise, one based on a book by the same name of the film.

It’s very long but I enjoyed it and didn’t pause for a break as it’s that well made. You can’t get enough of De Niro in the lead role to want to stop looking. It wasn’t so much an intriguing story but an acting master class. Scorsese detail is just so intoxicating. His fans will really enjoy this and a return to form for me.