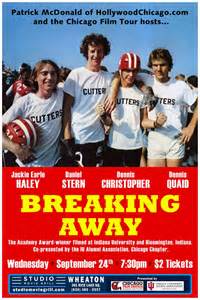 In the summer of 1979, I graduated from high school. At that moment, like many of my friends that next summer was spent in pursuit of Hollywood Stardom. My five closest friends and I went to every filming location for the movie Breaking Away that we could. Work frequently got in the way so we didn’t make all the scenes but we made as many as we could. The movie was everything because it was about Bloomington, about Indiana University and it was about town!

The last scene of the race is an epic one for my friends and I. We are the knees you see as team cutter rides to victory. We got a free lunch that day in the old 10th street Stadium in Bloomington Indiana.

Based on that reality I do admit that I am biased about this movie. I was within feet of the actors. I watched the movie being filmed many times. I also know that it is a movie that shares a very special event.

The Little 500 is the brainchild of some IU students, racing bicycles just like they do at the Indianapolis 500 hundred mile speedway. Well, they don’t race bikes at Indy, but they do the race in a large oval. So the Little 500 was born, racing bikes around the old 10th street Stadium and later around the track at the Bill Armstrong soccer stadium.

In the movie, we see the difference between the cutters (locals sometimes called townies) and the gowns (IU students). All of this set with a midwestern backdrop and a world where people were struggling to fit in.