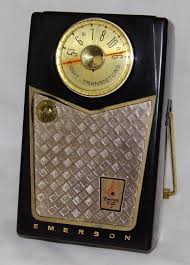 I read the post of a person who brought me back to the time when I did not go anywhere without my transistor radio. Ah, the memories of all those songs and the music I enjoyed always with me everywhere I went. I remember crowded beaches as a teen and my friends settling down on blankets to toast in the hot sun while the radio kept blasting tunes and informing us about the hot summertime and what we could do to cool off. With all these pleasant memories in my mind, I could hear Queen singing “radio we love you”.

“Radio Ga Ga” by Queen came out in 1984 and included on their album The Works. The single became popular all over the world and the band performed it in every one of their concerts including Live Aid in 1985. This song incorporated two major radio events of the 20th century. One was the 1938 broadcast made by Orson Wells of H.G. Wells The War of the Worlds and Winston Churchill’s speech from the House of Commons in 1940 “This was their finest hour”.