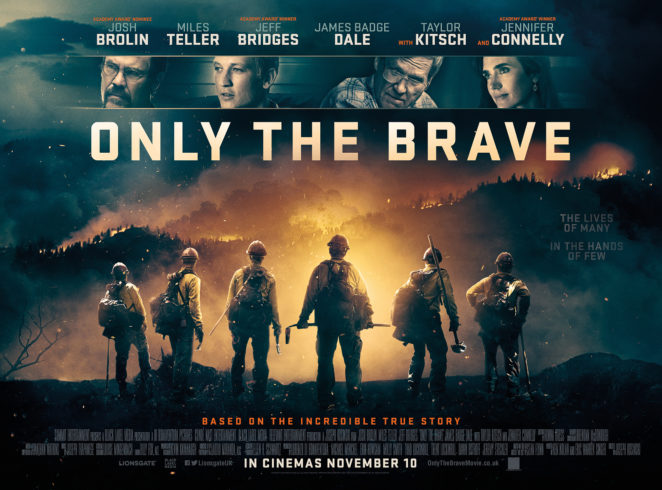 So, how many big budget Hollywood movies out there about bush fire control? Well not that many, perhaps why this one got some positive movie press attention but little box office, I guess, not your normal movie subject.

It’s based on the true story of the Granite Mountain Hotshots, an elite group of firefighters who tackle the bush fires in the beautiful Arizona countryside. They are unique in that they were the first fully professional non government recruited front line bush fighting team, this particular calling as heroic as it is dangerous. Not all heroic Hollywood true stories end in glory.

He and his team receive a call to attend the Cave Creek Complex Wildfire. His local knowledge on how to tackle the fire is ignored by the out of state California Hotshot team (the slang for the top professional firefighting crews) as a nearby neighborhood is burnt down.

Eric’s beautiful but complex wife Amanda (Jennifer Connolly) encourages him to talk to the City Fire Chief and old mate Duane Steinbrink (Jeff Bridges) to complete Crew 7’s certification as wildfire hotshots to help protest their communities better. But this will mean longer hours for the crew and a longer season as they could be called to other states. Amanda is already annoyed her husband won’t commit to starting a family and so quickly in his ear.

The team have a newbie, Brendan McDonough (Miles Teller), unemployed and onetime boozer and drug abuser. His ex-girlfriend is pregnant with his baby and this job may help to get his life in order. Eric can’t resist the challenge of turning the kid’s life around and soon a father figure to him. 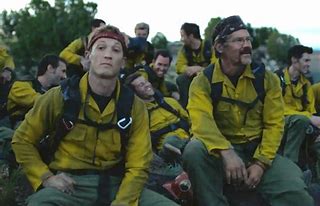 The crew has to prove themselves in an evaluation test and pass with flying colors, now the ‘Granite Mountain Hotshots’. Natalie is impressed with her mans new found maturity and lets him spend time with their daughter.

The Hotshots perform well with their new status and win epic battles with one of mans greatest enemies, fires, a few near misses on the way. But The Granite Mountain Hotshots are called to the Yarnell Hill Fire and everything is about to change…

Duane Steinbrink: If you’re looking for sympathy, the only place you’re going to find it is in the dictionary, somewhere between sh*t and syphilis.

Director Joseph Kasinski, he of the films Tron, Oblivion and the new Top Gun movie, was given $38 million dollars to make this one work, not that easy when dealing with such large panoramas and a heroic true story. Occasionally that budget gap shows.

It only did $25m back so in bomb territory but clearly one of those films that is anything but and simply suffered on the marketing budget with every penny going into the film, the distraction of Oscar winners Bridges and Connolly, and Josh Brolin, not coming cheap. The CGI action scenes do feel a little cheap at times but Arizona’s stunning vistas save the day. Another few million on this would have got this over the line as an action movie but clearly a decision made to go with the big names and melodrama and back-story over action.

Although a bit long at well over two hours as the characters are a tad over-developed between the forest fires the film is suspenseful and enjoyable enough with strong acting performances, Brolin excellent as the firefighter father figure to his young team, Bridges somewhat wasted here in his avuncular cameo role, as so with Connolly playing the token feisty glamour here. But changes are made to the true story to give it more drama, real people involved in the event used as extras in the movie for more authenticity.

Now, if you know the true story then this is going to be a much lesser cinema experience. I did not so, got enough out of this to enjoy it and the final punch a big one, enough power to floor Deontay Wilder. It makes you appreciate just how brave these guys are but also the appeal and importance to all, of the alpha male. One to watch out for on TV or your movie package.