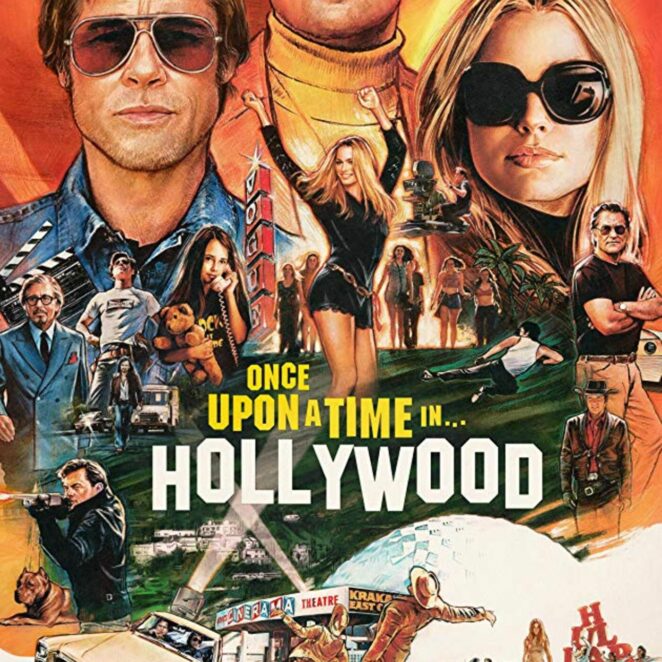 So Quentin Tarantino’s 9th feature film is Once Upon a Time in Hollywood, and his penultimate one, so he says, his target 10. He has actually made 16 but some don’t count, apparently. It’s fair to say his films have progressively got tamer and not patch on his first two, Reservoir Dogs and Pulp Fiction, DJango Unchained the most entertaining one for me since the first few. Inglorious Bastards annoyed me for some reason. Epilogue – A is to be his last film.

QT uses the same pool of actors for this one and a fifth appearance for Michael Madsen here, DiCaprio and Brad Pitt the stars, of which Pitt received an Oscar here in the co-lead. Samuel L Jackson leads the way on six appearances but not required here. Tim Roth, one of Hollywood’s most annoying actors, ticks up his 4th QT film here. It was also Luke Perry’s final film before his unexpected death.

Veteran and respected Hollywood actor Rick Dalton (Leo DiCaprio), star of the 1950s Western television series ‘Bounty Law’, frets that his career is drifting out. At a party casting agent Marvin Schwarz (Al Pacino) recommends he makes Spaghetti Westerns in Italy, Dalton feeling they are beneath him and furthering his depression.

Dalton’s best friend is stunt double and army veteran Cliff Booth (Brad Pitt) who lives in a Winnebago with his pit bull dog Brandy. He drives Dalton around Los Angeles after the actor loses his driver’s license. Booth is also struggling to find work in Hollywood because of rumors he murdered his wife.

Dalton has new neighbors, Actress Sharon Tate (Margot Robbie) and her husband Roman Polanski (Rafal Zawierucha), Dalton planning to get to know them to rev up his career. Soon to be notorious killer, Charles Manson, is also on the scene of the Polanski residence.

Dalton accepts an offer to play a villain in the pilot of a western series called Lancer but struggling to remember his lines and later suffers a breakdown in his trailer as a result; Booth always by his side to lift his ego and confidence.

Boosted by that he returns to the set and delivers an excellent performance that impresses the director, Sam Wanamaker (Nicholas Hammond), jump starting Daltons confidence.

Booth picks up a sexy female hitchhiker named Pussycat (Margaret Qualley), whom squats at a place called Spahn Ranch, where he once worked on the set of Bounty Law. Here he encounters a ton of hippies living there with the Manson Family. Fearing they are taking advantage of the owner and old friend George Spahn (Bruce Dern), Booth brutally beats up one of the hippies for damaging part of his car, drawing the ire of the Manson family for a coming retribution.

All a bit boring to be fair, rather too nuanced and slow with little action to be considered a film to recommend. Pitt and Leo are all very fine and in no way an Oscar winning turn y Pitt but the under siege Academy feeling like they needed a genuine Caucasian A-List star up there to sell the show after a few years of affirmative action. They are a good star pairing but the film becomes about those two trying to out – act each other with a ti of the hat here and the flick of the fag there. It’s Pitt’s sixth Oscar nomination and second win.

It’s a Tarantino movie so very long and no production editor brave enough to tell him to cut it down to two hours. The Oscar requisite seems to be very long movies these days. It’s a study of masculinity in the old 50s movies style of sharp cars and places and every scene and location immaculate and authentic. The action and drama is limited and the dialect not as snappy as it used to be with QT.

It’s based loosely around the Manson/Tate killings of that time and the ending slightly questionable. Don’t watch it for a biopic about that story. It will appeal to Tarantino fans and the more discerning film students but for me it was all rather self-indulgent and not the Tarantino I like.