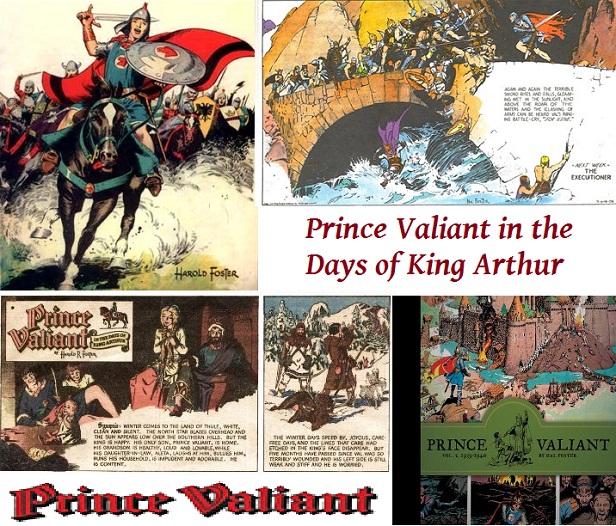 Once upon a time, a long time ago, in the days of my youth, when there was such a thing as the Sunday funnies, there was a comic strip I liked to read titled “Prince Valiant”.  Actually I liked the art more than I liked the story-line.  That was during the 60s.  I was curious to find references to the comic strip and to know what that name means in the 21st century.  I found a tweet that made me realize that the comic strip was being published long before the 60s.  It was a photo taken in 1942 that showed the famous American actor John Wayne reading the comic strip to his kids.  This comic strip was created by Hal Foster in 1937.  The adventures of Prince Valiant were also published as hardback books and comic books, adapted as movies and as an animated television series, and more.

After 80 years, the Prince Valiant plot is almost as convoluted as Star Wars (almost). The "Prince Valiant" comic debuted TODAY in 1937. pic.twitter.com/LgxvlgaVQO

Today we focus on @smoyer's film from 1997 "Prince Valiant." It was a beautiful story and well done! Learn more about the film and see photos, videos and more on our website here: https://t.co/wCXXXYvDMY pic.twitter.com/psZJd81suo

THE LEGEND OF PRINCE VALIANT

And this one which looks like a prince valiant comic filter but not the worst just didn't like it enough to hashtag it pic.twitter.com/oY78WSR16K