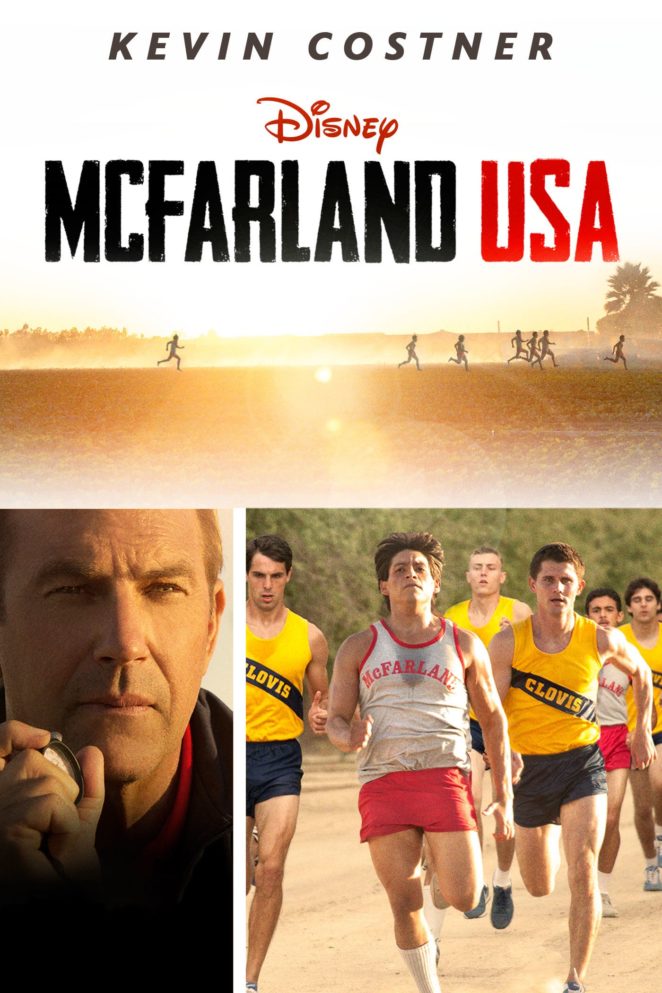 Anyone who runs for sport or pleasure knows there is nothing quite like the freedom of it when you are fit and flying. You got your tunes on the IPod and all is well and healthy.  But at school you hated cross-country, even the kids who can run like that wind preferring to smoke and stay in the warm. Well this film is the true story ( well, almost) of that running spirit, a pioneering high school in one of the poorest Hispanic neighborhoods in California that embraced cross country running to the full, their inspirational coach driving them on against the odds in true Disney style, not only to be top runners but to go on to college and live fulfilling lives.

Fired from his latest job as a college football coach, Jim White (Kevin Costner) and his family pitch up in McFarland, USA, an impoverished Mexican migrant town near the olive groves of rural dusty California, taking up the role as general sports coach and public school History teacher. His understanding wife Cheryl (Maria Bello) is not best pleased with the new neighborhood but makes the best of it to support her man, his two young daughters also in for a big culture shock.

He clashes with the main school football coach and soon removed from that particular roster, instead left to take athletics. All the young Latinos are not into school sport but jog around the track as instructed, after putting out their cigarettes. But some of the kids can really run, having to run to work the fields at the olive grove with their parents after school and at weekends to make ends meet keeping them fit and healthy. The families are paid by the field and not the day in these parts.

White suddenly sees a reason to his dead-end job and begins to train them in the discipline of cross-country. There first inter-school match doesn’t go well with last place but two or three of the lads have talent as the boys begin to improve and target the schools state championships. But can the coach understand their background and culture to get them to fully commit?

Although some of this film is not true as far as the drama and narrative go, added for dramatic reasons, other than the fact the school was in a poor area and is really Hispanic, it’s a Disney movie and so entertaining and uplifting, and with Kevin Costner as the coach in a sport movie you can’t really go wrong. As long as you know the kids lived that story and the coach was a true Disney hero in real life then you can go with it. I did and enjoyed it although nothing outstanding in the genre.

In the film the seven boy cross-country team has a fat kid in it which is rather silly and doesn’t work in any sense. The real team did not and the school eventually produced Olympians down the line. Let’s just say Coach White’s cross country program was a massive success in later years. White was not sacked from previous schools though and the school also had a very successful women’s cross country team that wasn’t used in the film. But the kids did do grueling work n the fields before and after school and this kind of family labor still goes on, each group allocated a field to pick and paid only when it’s cleared.

I enjoyed it enough and a huge fan of Costner, why I watched the movie. Disappointed they didn’t develop more of the peripheral characters in the movie and the forced stereotypes of the Mexicans, and the rather two-dimensional White family made it all about Costner screen time. There is nice bit in the end credits where we see the real White and his runners all grown up and the heartwarming reveal they all went on to college through running. Some say running makes you smarter although others say smart people run. Either way they are educated guys today and not picking olives and McFarland High still a top cross country school.