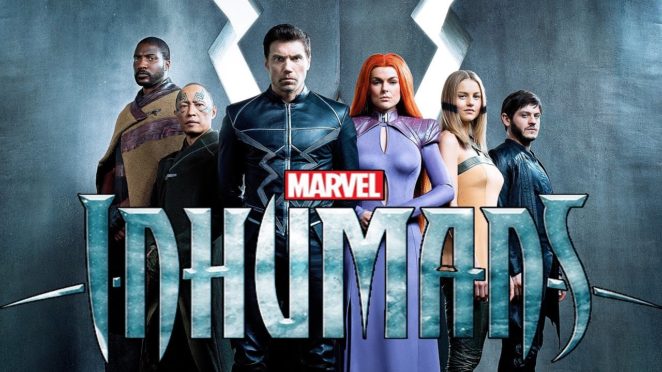 Marvel’s Inhumans, or simply Inhumans, is a 2017 American TV series created for ABC (American Broadcasting Company) TV network by an American TV writer Scott Buck. The series is based on the race of the same name from Marvel Comics. Set in the MCU (Marvel Cinematic Universe) that shares continuity with the films and other TV series franchise, this series from Marvel and IMAX Entertainment Project, was produced by ABC Studios and Marvel Television in association with Devilina Productions, where Scott Buck serves as the showrunner.

This Marvel series that newly launched on its first season from September 29, 2017 where it runs 8 episodes, centers on the story of the race of specially-skilled humans collectively called Inhumans. It centered on the story of the kingdom of Attilan, where it is located stealthily on the moon, where Black Bolt leads as their king. Black Bolt is played by American actor Anson Mount (Cullen Bohannon of Hell on Wheels/ Todd of In Her Shoes/ Alex Rosen of Safe/Paul Hayden of Smallville/ Kevin Wah of Ally McBeal/ Greg of Sex and the City). As the head of the Inhuman Royal Family and King of Attilan, he has a voice that is too powerful that even just his silent whisper can cause destruction. Her queen named Medusa, is played by Canadian actress Serinda Swan (Siren #2 of Tron: Legacy/ Aphrodite of Percy Jackson and the Lightning Thief/ Agent Paige Arkin of Graceland/ Cassanda Smythe of The Tomorrow People/ Erica Reed of Breakout Kings/ Zatanna Zatara of Smallville/ Veritas & Ashley Frank of Supernatural/ Alana of Hawaii Five-O/ Jez of Bayton Outlaws/ Emily of Creature). Medusa, as Black Bolt’s wife, helps him translate his sign language as he commands and governs the kingdom. They form a connection together that creates this certain type of symbiosis that keeps them entertwined to each other all through the years.

Two-time award-winning actor Ken Leung (Carter Chong of The Sopranos/ Sang of Rush Hour/ Miles Straume of Lost/ Admiral Statura of Star Wars: The Force Awakens/ Father Reggie of Zero Hour/ Kid Omega of X-Men: The Last Stand/ Detective Steven Sting of Saw/ Syatyoo-sama of AI: Artificial Intelligence/ Bian Yuxue of Oz/ Art Editor of Vanilla) played the role of Black Bolt’s cousin who can see the fault in all things, avoiding errors, and acts as the king’s closest adviser and the strategist and philosopher of the Royal Family. He can see flaws in advance of a coming event. Another cousin of Black Bolt named Gorgon, has the power to generate seismic waves with his cattle-like hooves. He is also the leader of Attilan’s Royal Guard. Gorgon is played by a Nigerian actor from Colorado named Eme Ikwuakor (Gabe of Ink/ Black Ops Commander of Extant/ Super Max Guard of Hawaii Five-O/ Mr. Jawara of Looking for Lions). Another cousin of Black Bolt named Triton, has the ability to live underwater. He is played by an American actor from Minnesota named Mike Moh (Ryu of Streetfighter: Resurrection/ Yakuza #1 of True Blood/ Steve Cho of Empire).

Crystal is the youngest member of the Royal Family and the younger sister of Medusa. She can control elements. She has a 2000-pound (910 kg) teleporting canine companion which she named as Lockjaw. Lockjaw is a CGI animated canine that also appears in the series. Crystal is played by an Australian actress Isabelle Cornish (Vicki of Puberty Blues/ Christy Clarke of Home and Away/ Elke of Dance Academy). Welsh actor, who also once played as the ruthless bastard king of Winterfell Ramsay Bolton of Game of Thrones, named Iwan Rheon (Simon Bellamy of Misfits/ Pill of Wild Bill/ Ash Weston of Vicious/ Jonas of Residue) played his role here as the antagonistic brother of Black Bolt who desperately usurp the throne at Attilan. He has the lavishing desire to undergo a second Terrigenesis process in order for him to become an Inhuman, which is not permissible to do as it will drive someone mad or even meet his own demise.

American actress from Tennessee named Ellen Woglom (Arryn of Hatred/ Jessica of Wendy Wu: Homecoming Warrior/ Cherish Hanson of Criminal Minds) cast in the series as a human from Earth who works at Callisto Aerospace Control Center. She has personal passion for space and things related to the Moon, and she has been exposed to the Terrigen Mist. Also in the cast is an American actress, a model and surfer from Hawaii who also competed in the Miss Teen USA pageant Sonya Balmores (Malina Birch of Soul Surfer/Kimberly Coyle of Kuleana) played the role of Auran, Maximus’ female compatriot, who became the new head of the Royal Guard in Attilan. She has the ability to heal herself. Five-time award-winning Peruvian actor Henry Ian Cusick (Desmond Hume of Lost/ Marcus Kane of The 100/ Udre Belicoff of Hitman/ Tommy Volker of The Mentalist/ Theo Stoller of 24) joined the cast as Dr. Evan Declan, a geneticist who has been testing Inhumans on Earth, secretly worked under the behest of Maximus. A young Inhuman who has visions of the future and brother of Iridia named Bronaja was also one of the cast in the series. He is played by Ari Dalbert, and it’s his first acting role in the show business.

Marvel Studios announced in 2014 that Inhumans should be set as a film, as part of their Phase Three slate of films, with the species first introduced to the MCU in Marvel’s Agents of SHIELD, yet the film was removed in April 2016, and it was announced as series that November, to be partly filmed using IMAX cameras. The filming took place in Kalaeloa, Hawaii, and various locations on the island of Oahu. Inhumans debuted on September 1, 2017 on IMAX screens — the first live-action TV series to debut on IMAX. Its theatrical run lasted two weeks, before the series premiered on ABC on September 29, 2017.

According to one of its executive producers Jeph Loeb, cautioned that Inhumans was “a television show that is premiering in an IMAX theater” rather than a film, but that it would still be a spectacle, and “a unique way to be able to see TV. According to him, by September 2017, Buck and the series’ crew “generally [knew] where the first three seasons could go”, with Buck noting that “there’s always going to be places” to take the different family members. He also said that there was a set point from where work on a second season would start.

Though the series has been met with unfavorable reviews and low ratings, I’m still satisfied with the production studios’ works since it’s all about Marvel Comics. Along with The Gifted, the other Marvel series that still continue to air until its 13th episode, this Marvel’s Inhumans, has its different side of story that will really make you feel that to be an Inhuman is not different from normal humans, they’re just something else. Worth to watch, I give this a five star!!!